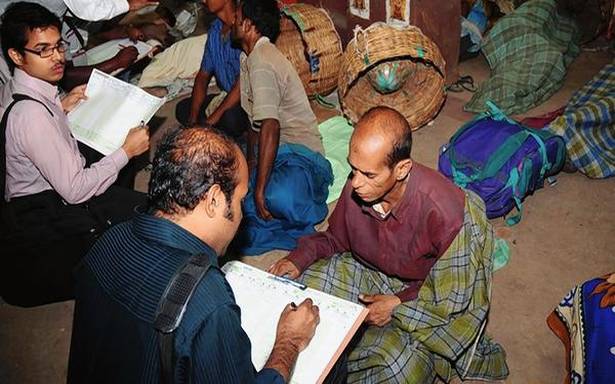 Apart from being used to demarcate constituencies, data is vital to administration

The story so far: Census 2021 has been postponed indefinitely, the Ministry of Home Affairs told the Lok Sabha last week. The massive, decennial exercise came to a grinding halt due to the advent of the COVID-19 pandemic. Apart from being used to demarcate constituencies, the Census data is also vital to the administration, and planning of key welfare schemes could be affected by the delay.

What was the original timeline of the Census and how is it being delayed?

The Centre’s intent to conduct Census 2021 was notified in the Gazette of India on March 28, 2019. The exercise was to have been conducted in two phases, with the housing Census from April to September 2020 and population enumeration from February 9, 2021, but did not take place due to the spread of COVID-19. In March 2021, the Home Ministry gave a Parliamentary panel a tentative alternative timeline. The fieldwork for the first phase, which would provide data on housing conditions, household amenities and assets possessed by households, is expected during 2021-22, while the fieldwork to count the population and provide data on demography, religion, Scheduled Castes and Tribes (SC/ST), language, literacy and education, economic activity, migration and fertility would be done in 2023-24, it said.

The Ministry added that provisional data would be released in 2023-24 before the next general elections. Usually, more detailed tables providing village-level data on specific indicators will continue to be released for several years after the key information.

How will the delay affect the public distribution system?

Under the 2011 Census, India’s population was about 121 crore, hence PDS covered approximately 80 crore people. However, economists Jean Dreze and Reetika Khera have pointed out that population growth over the last decade means that if the 67% ratio is applied to 2020’s projected population of 137 crore, PDS coverage should have increased to around 92 crore people. The current delay in Census data would continue to deprive more than 10 crore people of subsidised food entitlements, with the biggest gaps in Uttar Pradesh and Bihar, with 2.8 crore and 1.8 crore projected exclusions respectively.

“If the government wished to expand coverage, it could and should have done so using its own projection data, and there was no need to wait for the new Census, which has now been delayed,” said Himanshu, an associate professor at the Centre for Economic Studies and Planning at Jawaharlal Nehru University. “However, once the new Census data is released, they will have to revise it. At least, it will give State governments leverage to demand that their quotas be increased,” he added.

In March, the Food Secretary had said that any revision could only be considered once Census data was available, responding to queries regarding a Niti Aayog discussion paper proposing a reduction in NFSA coverage to curb the food subsidy budget.

What other welfare schemes could be affected by the delay?

Although Census data may have been initially used to estimate the coverage of the National Social Assistance Programme, which provides basic pension to 3.09 crore widows, disabled and elderly people below the poverty line, the Centre had announced its intent to shift to the Socio-Economic Caste Census data of 2011 instead to determine beneficiaries of the scheme. According to SECC data, coverage should double to six crore people although the Centre has failed to allocate a sufficient budget for any such expansion.

Most other Central schemes, from health insurance to housing entitlements, use SECC data to estimate their beneficiary coverage, although it is also outdated by almost a decade. “Census data may not be used to calculate the beneficiaries of most schemes, but it is critical to policy planning, budgeting and administration,” said Avani Kapur, director of the Centre for Policy Research’s Accountability Initiative. “For example, the Integrated Child Development Scheme is supposed to be universal, so any pregnant woman or young child can be registered at the anganwadis. But in practice, when States don’t have an accurate idea of what is the total population of potential beneficiaries, some of them put a cap or quota per anganwadi for funding purposes.” She added that a number of schemes need to use the disaggregated age and fertility indicators to assess effectiveness as demographics change over time.

How about Census data on migration?

The images of migrant workers rushing out of the cities and walking the highways towards their villages during the first COVID lockdown brought their plight to the spotlight and raised queries on the numbers, causes and patterns of migration, which could not be answered using outdated 2011 Census data. For example, the Centre had no answers on how many migrants were likely to be stranded in each city or State and in need of food relief or transport support.

The Census measures migration by counting those whose current residence is different from their place of birth, which would give the overall number of migrants, as well as by asking for the last place of residence and the reasons for moving, which allows an understanding of movements and trends over the last decade when compared with previous Census data. Given that the data is available at the village and block level, and includes analysis of the age, education level and socio-economic status of migrants, it allows for a granular, high-resolution understanding.

“Apart from the One Nation, One Ration card scheme which now allows for portability of food subsidy entitlements, the migration data is actually not used too much in broader economic policy and planning,” said Paaritosh Nath, faculty with the School of Policy and Governance at Azim Premji University. “One of the problems is the huge lag in migration data. For example, the D-tables on migration from the 2011 Census were only released in 2019, so it’s outdated by the time it came out,” he added.

He noted that the new Census is likely to capture the extent of the observed movement in migration trends towards smaller two-tier towns apart from the large metropolitan centres. It could help answer questions of what kind of healthcare and social services are most needed for migrants and where. Census data on the reasons for migration — whether economic or otherwise — could also help assess the impact of schemes such as MGNREGA on preventing distress migration, he said.