Even in the past, BJP had maintained that SBSP was not part of the National Democratic Alliance (NDA) but an ally only in Uttar Pradesh. The core voter base of the SBSP is the Rajbhar community, which constitutes around 17-18 per cent of the population in the Purvanchal region. 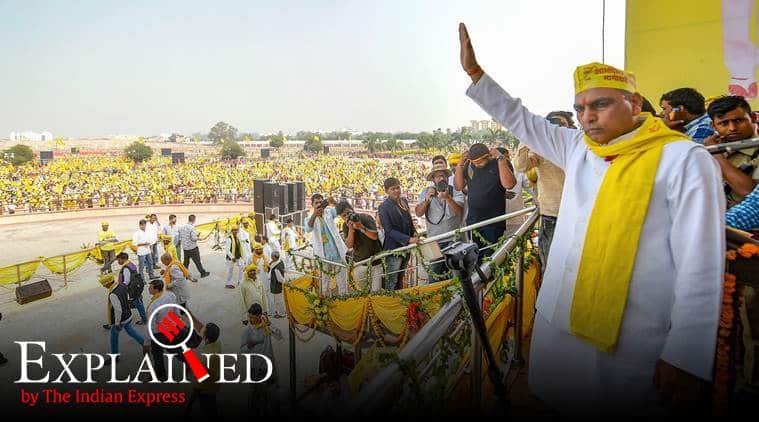 While the decision came a day after the final phase polling for the Lok Sabha elections ended on Sunday, SBSP chief Om Prakash Rajbhar claimed that he had submitted his resignation around a month ago.

Even in the past, BJP had maintained that SBSP was not part of the National Democratic Alliance (NDA) but an ally only in Uttar Pradesh. The core voter base of the SBSP is the Rajbhar community, which constitutes around 17-18 per cent of the population in the Purvanchal region. The SBSP wields influence in districts like Ghazipur, Mau, Varanasi, Ballia, Maharajganj and some parts of Shrawasti, Ambedkarnagar, Bahraich and Chandauli.

In the 2017 Assembly elections, the party contested on eight seats in alliance with the BJP and won four of them, garnering 0.7 per cent vote share. Rajbhar himself contested from the Zahoorabad seat and defeated the BSP candidate by a margin of 18,081 votes. His son Arvind Rajbhar contested from the Bansdih seat.

So why did the BJP decide to let go one of its most important allies in Uttar Pradesh? The answer lies in the recent political scenario in the state, where the SBSP was making controversial statements quite often against the saffron party, the latest being during the Lok Sabha election campaign when Rajbhar said that BJP members should be “thrashed” with shoes.

The relation between Rajbhar and BJP started turning bitter after the two parties could not reach a consensus on the seat-sharing formula. While the BJP offered SBSP candidates to fight on their symbol, the party did not agree to it and decided to go solo in the elections.

To ensure BJP’s defeat, Rajbhar recently also announced his support to different Opposition candidates where his party did not field a candidate. However, BJP tolerated the attacks, sending a message that the saffron party needed an ally in the state to reach out to the Most Backward Castes (MBC) and OBCs. Confident by the exit poll suggestions, BJP decided to remove the cantankerous Rajbhar.

So, is the BJP going to get another ally?

It should be noted that SBSP was not the only alliance partner that was threatening to part ways with the BJP. Earlier this year, BJP ally Apna Dal (S) coordinator and union minister Anupriya Patel expressed unhappiness with the BJP and even suggested that she might “take a decision” if they are ignored.

However, BJP gave two seats to Apna Dal(S) to assuage the party. The Apna Dal(S) has a strong voter base among the Kurmis and has a significant presence in the central and the eastern parts of the state. In 2017 Vidhan Sabha elections, the party contested on 11 seats as part of the NDA and won nine.

Similarly, BJP has found another important ally in the Nishad Party, which just like the SBSP has a significant vote bank in eastern Uttar Pradesh. As claimed by the Nishad party, the Nishad community has an influence on around 152 Assembly seats. In 2017, the party had contested on 100 seats in an alliance with the Peace Party and won just a solitary seat.

05/20/2019 India Comments Off on Explained: How the sacking of Rajbhar will affect BJP in Uttar Pradesh
India