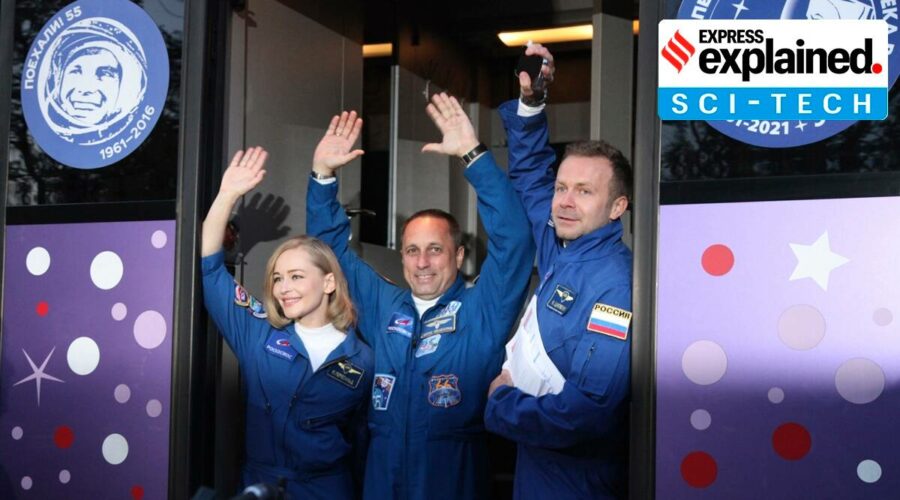 This Tuesday, actor Yulia Peresild and director Klim Shipenko travelled to International Space Station (ISS) in a Soyuz MS-19 aircraft to film about 35 to 40 minutes of footage from the movie titled Vyzov, or The Challenge. 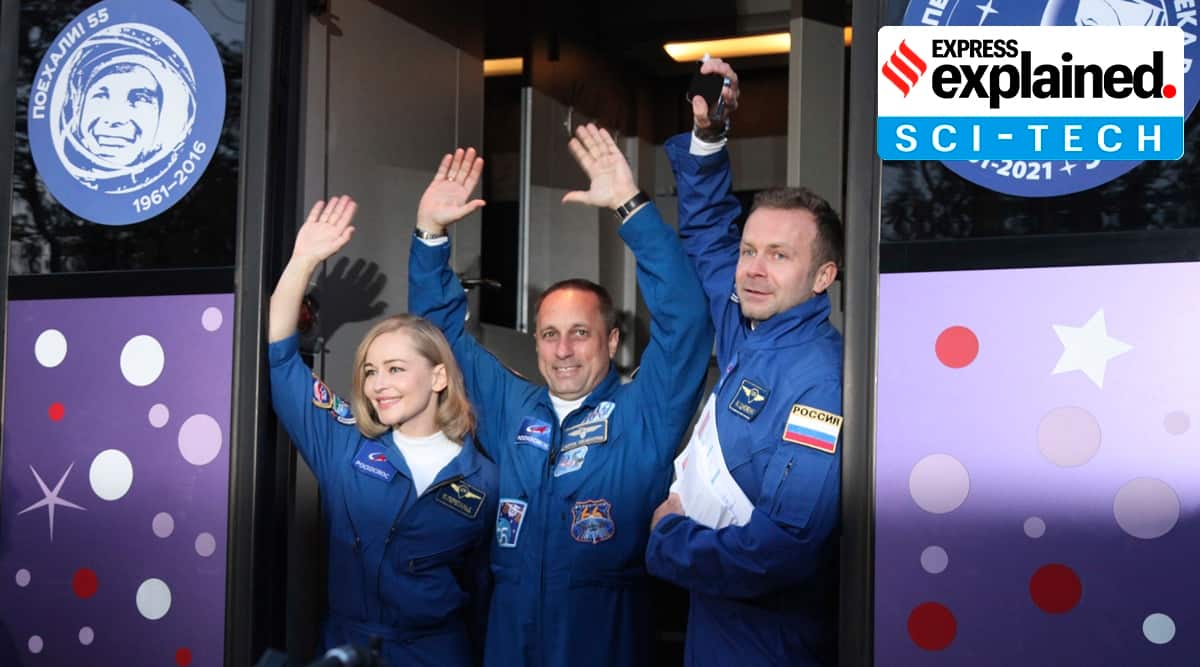 Sixty years after the Soviet Union beat its rival superpower United States to become the first state to send a human into space, its successor Russia has trumped the US in another kind of space race — shooting the first feature film in orbit.

This Tuesday, actor Yulia Peresild and director Klim Shipenko travelled to International Space Station (ISS) in a Soyuz MS-19 aircraft to film about 35 to 40 minutes of footage from the movie titled Vyzov, or The Challenge. With them was veteran cosmonaut Anton Shkaplerov.

Barring a minor hiccup related to the automatic docking system, the flight was an all-around success. Peresild and Shipenko will spend a total of 12 days in ISS.

Reports from last year had claimed that Hollywood star Tom Cruise, known for his death-defying stunts in Mission: Impossible movies, had been approached to make a movie in space. Doug Liman, who has directed Cruise in Edge of Tomorrow and American Made, was going to direct the film, with NASA and Elon Musk’s SpaceX also involved in the production. Later that year, the then NASA administrator Jim Bridenstine had confirmed the news to US news agency Associated Press, saying SpaceX will deliver Cruise and the crew to ISS.

What is the Russian film about?

Vyzov is about a cosmonaut who loses consciousness after being hit by space debris in the middle of a spaceflight. His condition does not allow him to return to earth, a surgeon is flown to the International Space Station to operate on him in zero gravity. Shipenko has also co-written the screenplay with Bakur Bakuradze.

Russian space agency Roscosmos, state television Channel One and the studio Yellow, Black and White are behind the project.

What is the reason behind making the film in space?

The realism argument can be given to explain why a significant portion of the movie is being shot in space. But in this day and age, visual effect artists, armed with nothing more than blue or green screens and computers, can make a soundstage look like Mars, or Middle-earth, or anything else one wishes. Photorealism in the film medium has been achieved to the point it is near-impossible to tell the difference between the real thing and visual effect. 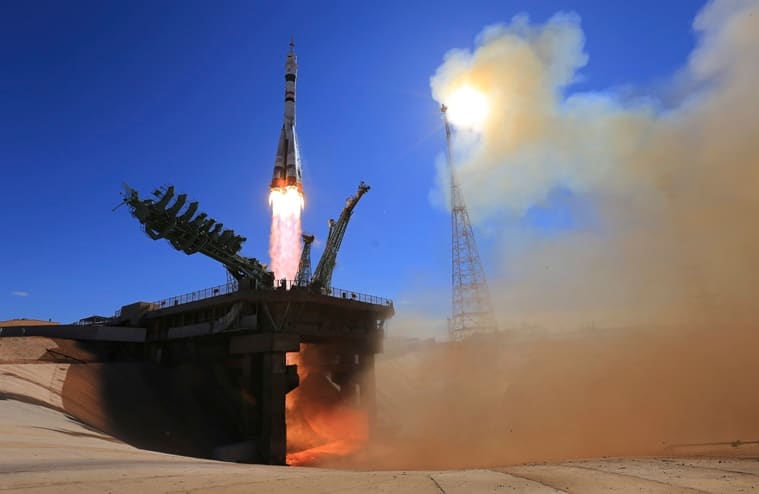 For instance, in Alfonso Cuarón’s 2013 acclaimed science-fiction thriller Gravity, every shot featuring space or celestial objects was built using computer-generated imagery (CGI). In fact, visual effects supervisor Tim Webber said the film was 80 per cent CGI. The film was still praised for its realism and went on to win seven Oscars, one of them for cinematography.

Roscosmos head Dmitry Rogozin explained the real reason behind the project: national pride. A major figure behind the film, he said his purpose was to glorify the country’s space capabilities. Associated Press quoted him as saying: “We have been pioneers in space and maintained a confident position. Such missions that help advertise our achievements and space exploration, in general, are great for the country.”

He added, “I expect the project to help draw attention to our space program, to the cosmonaut profession. We need a better visualisation of space research. Space deserves being shown in a more professional, artful way.”

What were the challenges faced by the cast and crew?

Travelling through space requires considerable physical and mental fitness. Both Peresild and Shipenko described the preparation training before the spaceflight as gruelling but added that the end result was ultimately worth all the toil. Peresild told reporters in a press conference (quoted by AP), “We worked really hard and we are really tired, even though we stay in good spirits and smile. It was psychologically, physically and morally hard. But I think that once we achieve the goal, all that will seem not so difficult and we will remember it with a smile.” 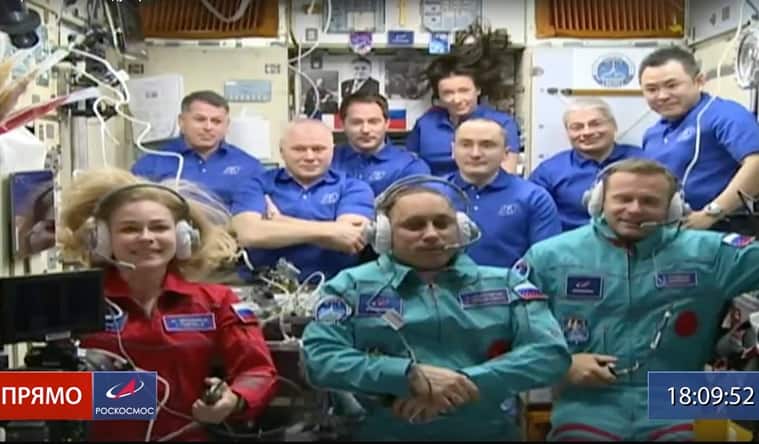 “Of course, we couldn’t make many things at the first try, and sometimes even at a third attempt, but it’s normal,” said Shipenko.

What’s up on with Tom Cruise’s space movie?

AP reports that as per SpaceX representatives producer PJ van Sandwijk contacted Liman to ask if he wanted to film a movie in space. In January, Liman had told the news agency: “There’s just a lot of technical stuff that we’re figuring out. It’s really exciting because when you make a film with Tom Cruise, you have to put stuff on the screen that no one’s ever seen before.”

There are no plot and other casting details available as yet.

Currently, Cruise is busy with post-production on the seventh Mission: Impossible movie and Top Gun: Maverick, the sequel to his 1986 action hit. Both big-budgeted studio movies may keep him occupied with their promotion for at least a year. Thus, it might be a while before he is free to film in space and the US catches up with Russia in this particular domain.

10/07/2021 India Comments Off on Explained: How Russia beat the US for second time in space
India