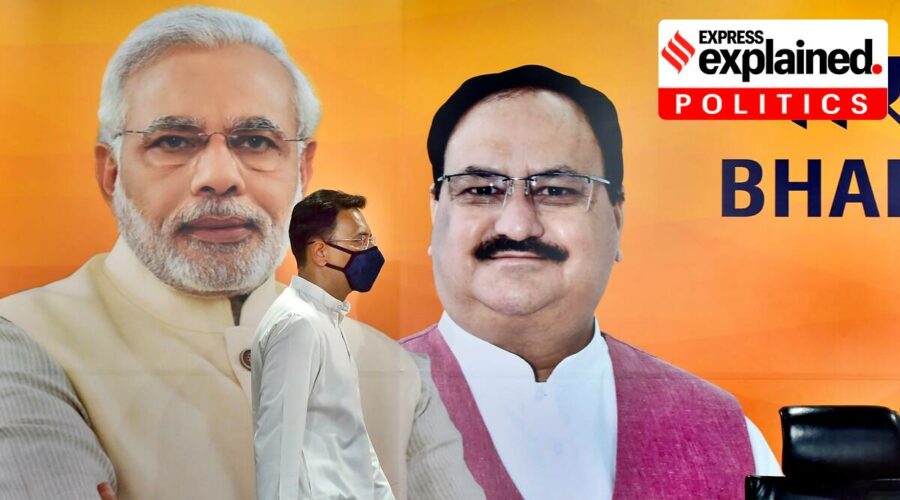 Like Jyotiraditya Scindia, Jitin Prasada, son of the late Congress veteran Jitendra Prasada, was once seen as a 'Young Turk' who would play a key role in Rahul Gandhi's team, as and when the latter became the unquestioned leader of the Congress. Jitin Prasada, the 47-year-old former Congress MP and former Union Minister, joined the BJP on Wednesday (June 9), more than a year after Jyotiraditya Scindia switched loyalties to the saffron party.

Like Scindia, Prasada, son of the late Congress veteran Jitendra Prasada, was once seen as a ‘Young Turk’ who would play a key role in Rahul Gandhi’s team, as and when the latter became the unquestioned leader of the Congress.

Prasada’s move had been expected — and much talked about in both the BJP and Congress. But his appointment as in-charge of the Congress in West Bengal ahead of the Assembly elections had put the lid on such talk, for a while at least. The expected has finally happened — just as the BJP steps up its preparations for the Uttar Pradesh Assembly elections that are now only months away.

According to Prasada, “BJP is the only real political party and it is the only national party.” He has claimed that he had felt he was “only surrounded by politics” in his former party, and that he had been unable “to contribute and do my work for the benefit of the people”.

How does the BJP gain from Prasada’s entry into the party?

Prasada enters UP’s ruling party at a time when it is facing public criticism and internal dissension at a scale not seen since it came to power in 2017 with an overwhelming majority of 312 in the 403-member Assembly, winning a straggering 41.7 per cent of votes.

The influential Brahmin community has been upset ever since Yogi Adityanath, a Thakur from Uttarakhand, took over as Chief Minister of India’s most populous state. For the BJP, the 12 per cent Brahmin vote is important, both electorally and socially.

The elevation of Adityanath and his perceived bias towards Thakurs has sharpened the faultlines among the upper castes. The killing of the Brahmin gangster Vikas Dubey in police custody and the related developments that followed, fanned Brahmin grievance against the BJP and the government. The BJP’s setbacks in the Hindutva bastions of Ayodhya and Varanasi in the recent local body elections was attributed to the growing anger among non-Thakurs against the BJP.

While it is true that the BJP already has Brahmin leaders in UP such as Deputy Chief Minister Dinesh Sharma, Union Minister Mahendra Nath Pandey, and state Cabinet Ministers Shrikant Sharma, Brajesh Pathak, and Rita Bahuguna Joshi (who too crossed over from the Congress), senior leaders of the party said the entry of a young, well-known Brahmin face like Prasada could “ease the pressure and buy peace” with Brahmins for some time.

Also, Prasada’s joining may help the BJP to push a “different narrative” — and blunt some of the rumours and speculation about the party in UP, a senior leader said.

“This (Prasada’s entry) shows that the BJP is the most accepted party. The Gandhis can’t even keep their closest friends with them, whereas the BJP is an ocean that everyone wants to join,” the leader said.

How important is Brahmin support for the BJP?

A veteran Brahmin BJP leader in UP said on Wednesday: “There are more than half a dozen Brahmin ministers in the UP government and several Brahmin office-bearers in the BJP organisation in the state — but none of them does the politics of Brahmins, and they have, therefore, failed to emerge as leaders of the Brahmin community. But Jitin and his family have a Brahmin identity. That identity is going to help the BJP in the Assembly elections.” According to this leader, Brahmins are upset with Adityanath’s government because while they have got representation in his Cabinet, they have no “powers”. Among the Brahmin Ministers in the Adityanath ministry, only Deputy CM Dinesh Sharma and Cabinet Ministers Shrikant Sharma and Brajesh Pathak are well known. The others, such as Ram Naresh Agnihotri, Neelkanth Tiwari, Satish Chandra Dwivedi, Chandikra Prasad Upadhyay, and Anand Swaroop Shukla, allow the BJP to claim it values Brahmins, but they do not count for much in terms of wielding any real power, this leader said.

According to this leader, there are around 18 per cent Brahmins in the state, but they influence the electoral choices of around 28 per cent of the population. Other parties too, have been trying to attract Brahmin votes.

In August, 2020, BSP chief Mayawati said that if voted to power in Uttar Pradesh in 2022, the party would build a grand statue of Lord Parashuram. A similar announcement was made by the Samajwadi Party earlier. Before that, when gangster Dubey was killed in early July, Mayawati had accused the Adityanath government of harassing Brahmins.

Earlier in 2018, after the killing of Apple executive Vivek Tiwari allegedly by two policemen in Lucknow, Mayawati had said: “Atrocities against Brahmins have increased under the BJP’s rule.” Such statements were reminiscent of the BSP chief’s famed social engineering formula to woo Brahmins, which had propelled her to power in UP with an absolute majority in 2007.

Prasada still enjoys remnants of the goodwill legacy of his late father. Last year, he had launched T-20 teams, apparently to give a voice to the Brahmin community, which he alleged had been “systematically targeted under the Adityanath regime”.

And what does this mean for the Congress?

It is definitely a setback for the Congress, which has been looking for a favourable political atmosphere and self-made leaders who can strengthen the organisation in the state.

Prasada was a trusted lieutenant of Rahul Gandhi and Priyanka Gandhi Vadra, the Congress general secretary in charge of UP. He was known for his proximity to the Gandhi family. With Priyanka attacking the Adityanath government on a range of issues including the plight of migrant workers and the management of Covid-19, the defection of Prasada serves to embarrass the Congress.

“The messaging is more important,” a BJP leader pointed out.

And what does it mean for the UP Opposition ahead of the Assembly elections?

It can be argued that Prasada’s exit has the potential to end up working to the advantage of the Opposition — in particular to that of the Samajwadi Party, which emerged as the single largest entity in the civic body elections.

With the influence of the BSP shrinking, and with Prasada’s exit signalling the continuing weakening of the Congress, the electoral choice for Muslims — who are believed to be influential in 40 per cent of seats — can be expected to have a narrower focus.

Said a senior Congress leader: “The results in Kerala (where the LDF swept the elections) have shown that Muslims voting en masse could be disastrous to the Congress and help other non-BJP parties. If the minorities sense that Akhilesh Yadav could defeat the BJP, they could throw their weight entirely behind the Samajwadi Party.”

06/09/2021 India Comments Off on Explained: How Jitin Prasada’s defection could impact the BJP, Congress, and SP in Uttar Pradesh
India