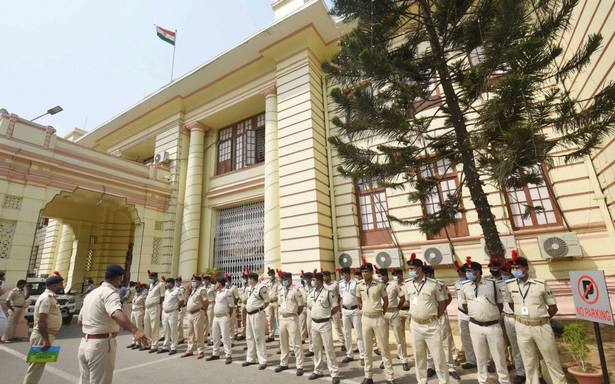 Bihar Special Armed Police Bill, 2021, allows arrest without warrants and places officers of the force beyond courts unless sanctioned by the govt.

The Bihar legislature witnessed pandemonium inside and outside the Assembly on March 23-24 as Opposition parties opposed the government’s attempt to pass the Bihar Special Armed Police Bill, 2021.

Protesting Opposition lawmakers were forcibly ousted by marshals and additional police forces called in by the Speaker’s office, with many injured in the scuffle that ensued. As many as seven opposition MLAs were seen with injuries and one Rashtriya Janata Dal (RJD) member Satish Das was taken out on a stretcher.

Outside the Assembly, legislators and workers of the RJD clashed with the police who tried to prevent them reaching the building leading to a baton charge by the police, which again left many injured.

Following the incidents, the RJD-led Opposition has said it will boycott the Assembly until Chief Minister Nitish Kumar apologises for the police action. The Opposition also called for a state-wide bandh on March 26.

Amid din, however, the contentious Bill, was passed in both the Houses.

What is the new Bihar Special Armed Police Bill, 2021?

The contentious Bill proposes to rename the Bihar Military Police (BMP) and grant it powers of the Central Industrial Security Force (CISF) to search and arrest without seeking a warrant from the court or the magistrate (Section 7 of the Bill).

Under the Act, an Special Armed Police Officer can arrest any person against whom there is reasonable suspicion committing a cognizable offence which relates to property belonging to, or in the premises of, any such specified establishment. Also under this Act, whenever any Special Armed Police Officer, not below the notified rank, has reason to believe that any offence has been or, is being committed and that a search warrant cannot be obtained without affording the offender an opportunity of escaping or of concealing evidence of the offence, he may detain the offender and search the person and his belongings forthwith, and if he thinks proper, arrest any person.

The Special Armed Police Officer making an arrest under this Act, shall, without unnecessary delay, turn over the detainee to a police officer or, the nearest police station together with a report of the circumstances occasioning the arrest.

What the Bill says?

The Bill says it will be for maintenance of public order, combating extremism, ensuring the better protection and security of specified establishments.

What is the role of Court under this Act?

No court shall take cognizance of any offence under this Act where the accused person is a Special Armed Police Officer except on a report in writing of the facts constituting such offence and with the previous sanction of an officer authorized by the Government in this behalf.

What the government says on the Bill?

Chief Minister Nitish Kumar has said the Bihar Military Police needed a separate identity on the lines of CISF for security at airports, industrial establishments, and temples like Mahabodhi in Gaya etc. It is not against people but for the people as it will strengthen internal security and such police forces are functioning in other States as well.

Why is the Opposition protesting?

The Opposition has termed the Bill “draconian and unconstitutional” and an attempt by the government to enforce “Police Raj” in the State. The joint Opposition statement said the Bill will “effectively transform the police force into an armed militia to throttle the voice of the people, academics, activists, journalists, political opposition and those who would dare to speak the truth”.

Rashtriya Janata Dal legislator from Ramgarh Sudhakar Singh told The Hindu: “In a democracy where has the provision of power separation gone? Section 15 of the Bill says even if a person is shot, the inquiry will be done not in the court or by the magistrate but by the police. Through this Act, the BMP will function as National Investigating Agency (NIA)”.