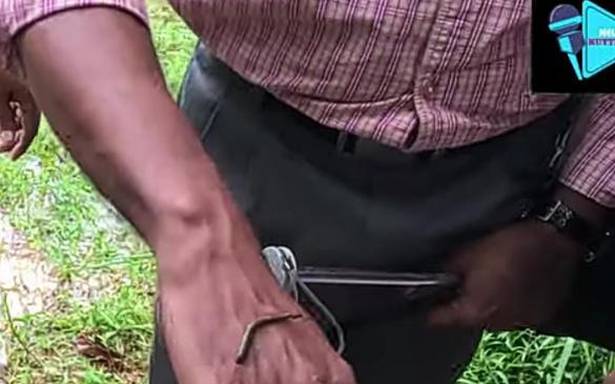 A multidisciplinary diagnostic team that visited leech-infested paddy fields in Velom panchayat on Friday has suggested to the farmers that they apply copper sulphate solution to temporarily inactivate the worms.

In Velom, a massive population of leeches was found in the water as farmers began operations. The leeches were found in at least half of the 500 acres of paddy fields in the panchayat. They latch on to the human body and suck blood. Farmers are worried as the leech bite causes allergy and skin irritation.

The team, headed by Sreekumar K.M., professor and head of the Department of Entomology, Kerala Agricultural University, said there was no need for panic and that farmers could eliminate the leeches by the next farming season by adopting effective steps.

Mr. Sreekumar said the best way to avoid having leeches fastening to farmers’ legs was by using protective garments on the feet and legs. However, that would be difficult for farmers and hence, they should try using salt, tobacco, or copper sulphate solution on their legs to ward off leeches.

“Fallow lands that remain untouched are the breeding grounds of leeches. They are asleep during the summer and are activated by the rains. There is a need to plough the uncultivated land two or three times during summer months and to add 650 kg of lime per hectare to inactivate the leeches,” said Mr. Sreekumar.

According to the team, keeping fields fallow and permitting cattle grazing will facilitate the survival and spread of the leeches. As water from one field enters another, the leeches also spread.

“Copper sulphate is the best solution. It is a protoplasmic poison that may even kill small fishes. Allowing salt water to enter the fields could kill the leeches completely. But the said field cannot be used for paddy cultivation for three years if it is done,” added Mr. Sreekumar.