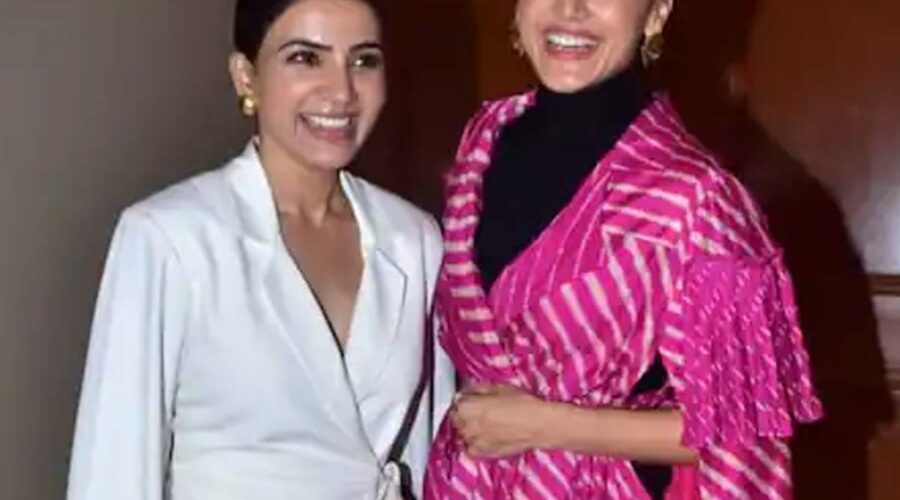 A few weeks ago, Samantha Ruth Prabhu was invited to a chat show where she was opened up about her personal life, social media trolling, future plans and more. The chat show also invited celebrities like Sidharth Malhotra, Taapsee Pannu, Vicky Kaushal, Sanya Malhotra, and Adarsh Gourav because of their achievements this year.   During the shor Samantha’s bonding with Taapsee Pannu  was highlighted.  Now the reports are coming that  The Family man 2 fame actress Samantha has now decided to  make a debut in Bollywood with Taapsee Pannu.

On the otherside,  Samantha has been roped  in her first international film, ‘Arrangements of Love,’ which will be staged by BAFTA-winning filmmaker Philip John of ‘Downtown Abbey’ fame. In the film, Rangasthalam and U Turn fame actress  will be playing the role of a bis*xual Tamil woman with a strong-mindset who runs her detective agency and becomes part of the search.

She is also seen shaking a leg for the special song  in today released movie Pushpa: The rise starring Allu Arjun and Rashmika Mandanna.

Samantha- A bis*ual woman in Arrangements of Love

Samantha about Bollywood debut: Will I be able to do justice to it?

12/29/2021 India Comments Off on Exclusive: Samantha and Taapsee team up for a pan-India  female-centric movie
India