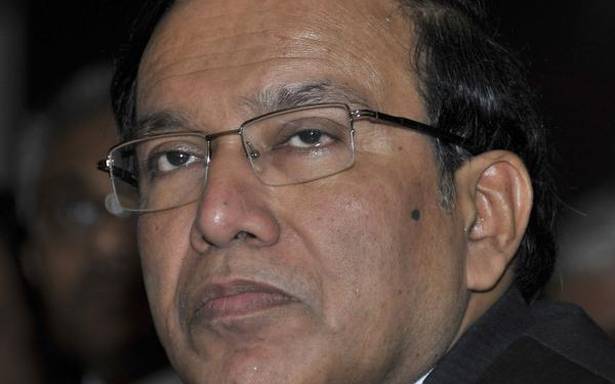 The Chief Judicial Magistrate’s court in Rajasthan’s Jaisalmer city on Monday sent former chairman of State Bank of India (SBI) Pratip Chaudhuri to judicial custody for 14 days, rejecting his bail application in an alleged loan scam. Mr. Chaudhuri was arrested from his Delhi residence based on warrants issued by the court.

The case against Mr. Chaudhuri, who retired from the SBI in 2013, pertained to two hotel properties worth ₹200 crore in Jaisalmer having been sold at a much lower price of ₹25 crore after declaring them the non-performing assets (NPA).

The Godawan Group had taken a loan of ₹24 crore from SBI for its hotel project in 2007. The project remained incomplete for over three years, while another hotel of the group was functioning. The key promoter died in April 2010, after which the account slipped into NPA in June 2010. The SBI moved on to seize both the hotels when Mr. Chaudhuri was the chairman and later sold them to an asset reconstruction company (ARC), Alchemist, at ₹25 crore as part of its recovery efforts. Mr. Chaudhuri subsequently joined Alchemist as a director after his retirement from SBI.

The borrower, who had initially lodged a first information report with the police against the sale of assets to Alchemist ARC, filed a protest petition in the CJM’s court on being aggrieved by the closure report filed by the police authorities.

The CJM’s court had recently issued arrest warrants against Mr. Chaudhuri and seven others after a hearing on the protest petition. Alchemist ARC took over the hotels in 2016 and an assessment carried out later showed that the market price of the properties was ₹160 crore in 2017. The assets are at present valued at ₹200 crore.

After Mr. Chaudhuri, brought by the police from Delhi to Jaisalmer, was produced in the court, his counsel moved a bail application. CJM Hanuman Sahai Jat dismissed the bail plea after a brief hearing and ordered Mr. Chaudhuri to be sent to judicial custody till November 15. The former SBI chief was then taken to the District Jail.

In a clarification on the matter, the SBI stated on Monday that the sale to the ARC was carried out through “a laid down process as per the policy of the bank”. The SBI said the borrower was subjected to the Insolvency and Bankruptcy Code (IBC) process by the ARC and the assets had been acquired by a non-banking financial company in December 2017, again through due process under the orders of the National Company Law Tribunal, New Delhi.

“As [the] recovery efforts failed, approvals for sale to ARC were taken in January 2014 and the assignment to ARC was completed in March 2014… Mr. Chaudhuri retired from the bank’s service in September 2013,” the SBI said in the statement.

The SBI affirmed that it was not made a party to the case, while all the directors of the ARC, including Mr. Chaudhuri who joined their board in October 2014, had been named in the case. While offering its cooperation to the law enforcement and judicial authorities, the SBI said the court did not appear to have been briefed correctly on the sequence of events.

“In as much as the SBI was not a party to this case, there was no occasion for the views of SBI being heard as part of the court proceedings. The SBI would like to reiterate that all due processes were followed while making the said sale to the ARC,” the statement said.