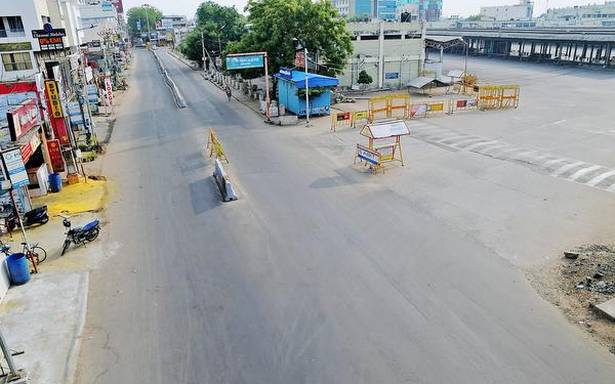 Barricades were placed on most of the roads restricting vehicle movement

It was a complete lockdown on Sunday as all the shops, except pharmacies and petrol bunks, remained closed while roads wore a deserted look as people stayed indoors.

To control the spread of COVID-19, the State government announced a new night curfew and complete lockdown on Sundays recently. All shops selling vegetables, including Uzhavar Sandhias, fruits, tea, snacks, meat, Tasmac outlets, retail shops and other commercial establishments were closed for the day while pharmacies, petrol bunks and milk vendors operated during the lockdown. All the Amma canteens functioned in the district and food was given in only parcels to the customers. Only a few hotels operated during the stipulated time in the city offering takeaway service as customers were not allowed to dine while one hotel on Mettur Road opted to sell food only through online delivery platforms.

Except for a few vehicles on the roads, including that of marriage parties, most of the roads wore a deserted look. The police placed barricades on most of the roads restricting movement of vehicles while those moved on the road were questioned. Two inter-State check-posts with Karnataka at Hasanur and Thattakarai in Bargur Hills and 11 inter-district check posts were closed and vehicles were not allowed to enter the district. Workers from Gujarat, who arrived at Erode Railway Junction to reach Namakkal, faced the heat as in the absence of buses they stayed on the junction premises. Likewise, many migrant workers in the district reached the junction on foot and boarded trains to North India on Sunday.