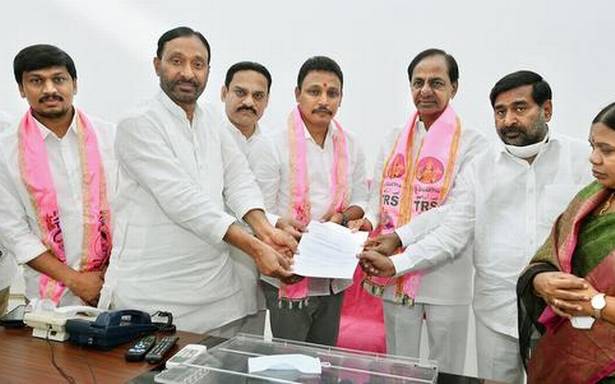 CM to address public meeting in Halia on April 14

Chief Minister K. Chandrasekhar Rao will boost the TRS party’s campaign in the Nagarjunasagar bypoll with a public meeting in Halia on April 14 with a specific target of negating any emotional support for Congress candidate K. Jana Reddy.

Party leaders revealed that though the CM was quite happy with the ongoing campaign, he doesn’t want to leave any scope for a repeat of the Dubbak by-poll result where the party was overconfident despite the strong challenge from the BJP during the campaign.

Mr. KCR did not campaign in Dubbak despite requests from the party MLAs as he was sure of a win even if it was by a reduced margin. BJP won with a small margin of 1,079 votes but interestingly it covered the 62,500 margin with which later, Solipeta Ramalinga Reddy had won in 2018 elections. Many believe that a public meeting by the CM would have plugged that small margin.

However, the opponent in Nagarjunasagar is no greenhorn either and the TRS is pitted against seven-time MLA and senior leader K. Jana Reddy of the Congress. Apart from his strong connection with the constituency, Mr. Jana Reddy is also exploiting the sentiment that he was defeated last time and this may be his last direct election thus connecting with the voters.

Mr. KCR is well aware of this political strategy that might work for Mr. Jana Reddy and doesn’t want voters to deviate from TRS on this emotional angle, a senior leader told The Hindu. There is no better leader in Telangana than KCR to connect with people emotionally and the public meeting would be precisely to negate Jana Reddy’s emotional appeal.

Yadavas vs other BCs

The TRS leadership has put in senior Ministers and also MLAs for each mandal considering the caste equations. A senior leader on condition of anonymity said that the late Nomula Narsimhaiah had rubbed other BC groups on the wrong side by openly supporting only the Yadava community in the constituency during his tenure. In fact, there was a demand from several BC leaders that they would oppose if the party candidate was from the Yadava community.

“It was also one of the reasons why the party supremo did not reveal the candidate’s name till the last minute keeping everyone guessing,” a leader argued. “We also couldn’t annoy the numerically strong Yadavas. We couldn’t even afford division of Yadava votes and that is why a lot of effort went to bring in BJP aspirant Anjaiah Yadav into our fold.”

Given these multiple factors of the complex political situation, the Chief Minister has decided to give the final dose of Telangana and development emotion, which he is pretty good at, through the public meeting. CM may not personally target Mr. Jana Reddy but reel out the improvement of irrigation facilities after the formation of Telangana.

TRS working president K.T. Rama Rao is conspicuous by his absence from the Nagarjunasagar by-election campaigning baffling the party cadre. However, a senior leader said a road show is being planned after CM’s meeting where he will connect with the youngsters who the party feels has been siding with the BJP in the last few elections.

04/04/2021 India Comments Off on Emotion, development dose to be KCR’s weapon
India