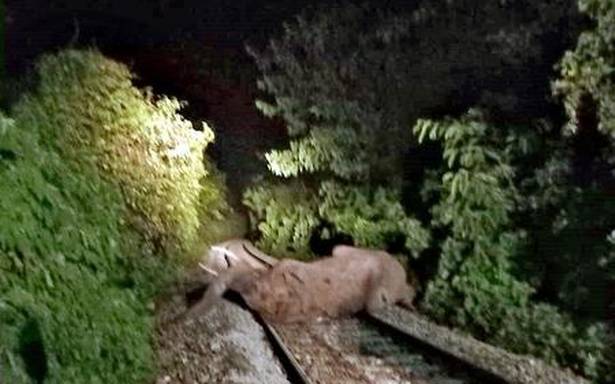 It was crossing the track around 10.30 p.m on Tuesday

A tusker, aged about 25, died after being hit by a passenger train at Haside near Sakleshpur on Tuesday night. The elephant was hit by the Bengaluru-Karwar train (06585) while it was crossing the track around 10.30 p.m.

The train was stopped at the spot for more than two hours until the carcass was removed with the help of a crane and the track was cleared.

Rahul Agarwal, divisional railway manager of Mysuru, told The Hindu that according to the driver of the train, the elephant appeared in front of the train suddenly. “The driver did apply brakes. The train takes time to stop. However, one cannot apply brakes fully in such situations as such a step could derail the train. It is unfortunate that the tusker died,” he said.

The officer said drivers on the route had been cautioned about the movement of elephants and constant whistling would be done while crossing the stretch. “Our staff immediately informed the Forest Department officials. They came to the spot. With the help of our crane, the track was cleared,” the DRM said. Further, he said the department would hold discussions with the Forest Department on the measures to avoid such incidents. Deputy Conservator of Forests of Hassan K.N. Basavaraj said the department had booked a case under the Wildlife Protection Act and a post-mortem was conducted on Wednesday.

Around 60 elephants, spread over different herds, have been roaming in Sakleshpur, Alur and Belur taluks of Hassan district. Often, they raid coffee estates, agriculture fields, damaging crops and hurting humans. This is the fourth elephant death reported in Hassan district this year.