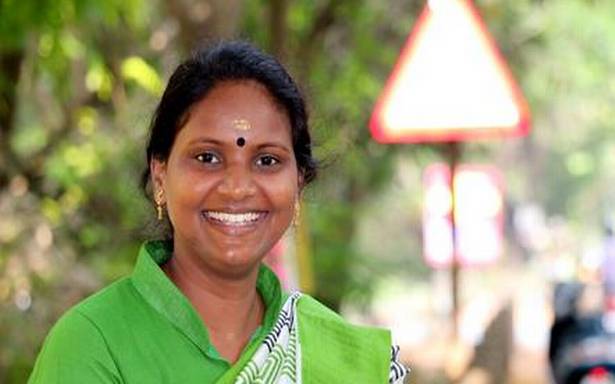 Ms. Ramya emerges victorious and makes history by wresting the LDF bastion of Alathur by a margin of more than one lakh votes.

Ms. Ramya won the people’s heart the day she started campaigning in Alathur against the LDF’s incumbent P.K. Biju. Congressmen carried her on their shoulders, proudly proclaiming her as their “little sister”. She made a difference in the campaign by way of her affable approach and openly positive attitude.

And on Thursday, when the votes were counted, Ms. Ramya stood apart not only by emerging victorious but by annihilating Mr. Biju, one of LDF’s surest bets in the State. She made history by wresting Alathur by a margin of more than one lakh votes (the final results are yet to be announced).

Mr. Biju’s fate had almost been sealed when Ms. Ramya approached the voters of Alathur like a girl next-door. She sang to the mood of the crowd whenever they asked her to. People of Alathur saw in her a vivacious spirit that they never found in Mr. Biju, who had faced criticism for his lack of presence in the constituency.

LDF’s convener A. Vijayaraghavan’s sexist remarks against Ms. Ramya during an election campaign in Ponnani were the icing on the cake. She took him on legally and gained mileage from his embarrassing remarks. “I should thank him for that thoughtless comment,” she said in jubilation on Thursday.

Ms. Ramya had stepped down from the post of Kunnamangalam block panchayat president soon after the elections, anticipating her elevation to Parliament from Alathur.

Hailing from a socially and economically poor background, Ms. Ramya’s life began taking an upward swing when she was handpicked by the Congress national president Rahul Gandhi six years ago. Her outstanding performance in a talent-hunt programme organised by the Congress in New Delhi six years ago had caught Mr. Gandhi’s attention, and she became an active member of his chosen team.

Ms. Ramya played an active role in the Adivasi struggles carried out under the banner of the Ekta Parishad. She represented the country at a global youth meet held in Japan in 2012.

A graduate in music, Ms. Ramya used to steal the audience’ hearts in music and dance in school arts festivals. Forums such as Jawahar Balajana Vedi and the Kerala Students Union (KSU) had fuelled her growth during her studentship. National coordinator of the Youth Congress, Ms. Ramya had won the Nehru Yuva Kendra award for the best public worker in 2007.