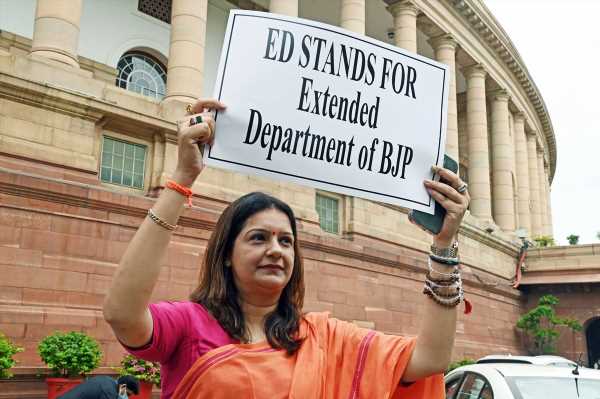 ‘Hindutva doesn’t teach you to stab someone in the back.’

“The minute the people of a state choose to elect another political party, then you bring in an enforced democracy model where you use all central agencies, money and muscle power to topple democratically elected governments and install your government in place,” Priyanka Chaturvedi, the Shiv Sena’s Rajya Sabha MP, tells Prasanna D Zore/Rediff.com.

How is Uddhav Thackeray planning to rebuild the party?

Rebuild the party in what sense? In terms of people we lost in the (Maharashtra) assembly and members of Parliament? Those who left us (40 MLAs and 12 Lok s=Sabha MPs) should know that the Shiv Sena is a cadre-based party and those MLAs and MPs who left us won because of the hard work of this cadre.

While these people (MLAs and MPs who defected to the Shinde camp) may have forgotten this fact and deserted us, the party workers and cadres will always remain loyal to the Shiv Sena.

It is with this confidence we have challenged them to quit the Shiv Sena and face fresh elections; that can only be the best way for them to prove their strength. Let them win on their own.

Go to the people again if you have the guts because people elected you on the Shiv Sena symbol. And you have chosen to betray this responsibility entrusted upon you.

The other side of this is that a massive chunk of MPs and MLAs have gone to the other side after they were threatened with ED cases but that doesn’t affect us now.

The Shiv Sena knows that its strength is the love and loyalty of our cadre, our supporters and so Uddhavji has already started meeting our cadres and grassroots workers in Maharashtra.

I am sure the Shiv Sena will emerge stronger from this crisis thrusted upon us by the people who were wholeheartedly trusted by Uddhavji.

It has already happened four times with the Shiv Sena, it has happened again now, but the party has always emerged after such kind of defections.

Do you look at this as sort of Amrut Manthan for the Shiv Sena and feel that a stronger Shiv Sena will emerge from this crisis?

The way the Shiv Sena changed its trajectory (after Uddhav Thackeray took over the reins of the party) and the response it got from the people of India, no Shiv Sainik has an iota of doubt that we will emerge stronger.

In just two years, he (Uddhav Thackeray) emerged as one of the most popular chief ministers in the country and lot of myths about how people perceive the Shiv Sena were busted. That is what works for us.

Eknath Shinde and the MLAs and MPs who went with him repeatedly claim that they defected because they wanted to carry forward Shiv Sena supremo Bal Thackeray’s brand of Hindutva.
Would this impression being created by Eknath Shinde appeal to hardcore Shiv Sena cadres and that could severely dent their support for Uddhav Thackeray?
The Shinde group is projecting Uddhav Thackeray as someone who did not espouse Bal Thackeray’s brand of Hindutva.

What is Balasaheb’s Hindutva? It enshrines equal respect for all (religions). There shouldn’t be any kind of appeasement in any format and that is what he stood opposed to.

If you look at our (Maha Vikas Aghadi) governance, our first decision was to restore the glory of Raigad Fort (the capital of Shivaji’s kingdom).

After his oath-taking as the chief minister, he (Thackeray) first visited Ayodhya to seek Ram Lalla’s darshan and blessings. The Shiv Sena was the first political party which donated to the cause of Ram Mandir.

In terms of governance, there was zero appeasement of anybody (any religion). The state was governed with the principle of equality for all. That is what Balasaheb and his Hindutva ardently stood for. And we (the MVA government led by Uddhav Thackeray) did just that.

The excuses that Eknath Shindeji is giving sound so hypocritical because if he had any problem with this alliance (the coming together of political parties like the Shiv Sena, Nationalist Congress Party and Congress having diametrically opposite ideologies) then he takes three important portfolios without showing any sign of remorse for betraying Balasaheb’s Hindutva or feeling pained for doing so.

Hindutva, as we perceive, is Vasudeva Kutumbakam (the whole world is one family). Balasaheb Thackeray jo bolte the, karte the (Balasaheb Thackeray was a man of his word). He was never a man who said something and did something diametrically opposite, which people who spoke some different language two-anda-half years ago and are made to speak a different language (scared by the central investigative agencies) are doing today. 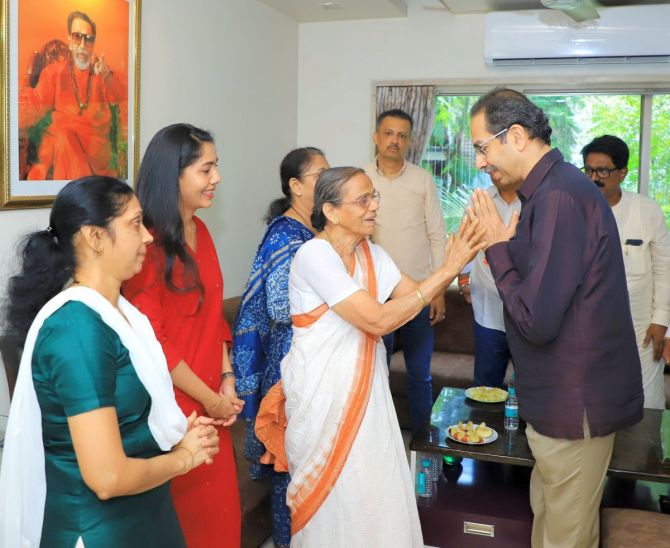 What does it take to remain with Uddhav Thackeray’s Shiv Sena at this juncture?

All that it takes is honesty and commitment to the causes that the Shiv Sena was born to fight for and that is the reason why we (all the MPs, MLAs and party functionaries who are still with Uddhav) have joined forces with Uddhav Balasaheb Thackeray.

Under his leadership, we have no fear that ED or any other central agencies can sway or intimidate us, no greed for money or greed for absolute power — that the Bharatiya Janata Party espouses through various scheming tactics are implementing across states in India — can sway us to betray the Shiv Sena and Uddhav Balasaheb Thackeray.

That, I believe, is the core reason why everybody is rallying behind the Thackerays.

Most importantly, and the rebels may be blind to this, the party’s rank and file stand firmly with the Thackerays.

How is Uddhav’s morale after the desertion of 12 MPs soon after the defection of 40 MLAs to join the Eknath Shinde camp?

Uddhav Thackeray is a cool fighter. He is someone who will never let his emotions show every time.

Eknath Shinde was the second-in-command in the Shiv Sena and who Uddhavji trusted completely. During the two-and-a-half years he was at the helm of affairs, and despite two life-threatening surgeries he underwent, he very bravely and confidently oversaw the COVID-19 pandemic.

He assumed that his second-in-command (Shinde) would handle the show till the time he was out of action, but he was the one who plotted against him. Definitely, there is a strong sense of betrayal, but there is also a stronger sense of fighting back.

We all know the road is going to be tough and so it is our duty to become tougher just so that we can carry forward Balasaheb’s grand legacy.

What happens after the Supreme Court verdict on disqualification of 16 rebel Shiv Sena MLAs whichever way it goes? What could be its ramifications if it goes in your favour and vice versa?

The Supreme Court’s decision (on the issue of disqualification of 16 rebel MLAs) will not impact just Maharashtra, but the ethics of Parliamentary democracy as a whole.

We know it could go either way, but we all believe that the Supreme Court will stand up for the Constitution of this country, for our electoral and Parliamentary democracy and we know that our Constitution will prevail.

Imagine your vote becoming null and void because the MP, the MLA you elected based on the party symbol your love decided to defect under threats from powerful people, then what is the point of conducting elections?

We are now seeing a situation where there is an elected form of democracy where the voter elects the BJP and the government completes its tenure without any hiccups.

The minute the people of a state choose to elect another political party, then you bring in an enforced democracy model where you use all central agencies, money and muscle power to topple democratically elected governments and install your government in place.