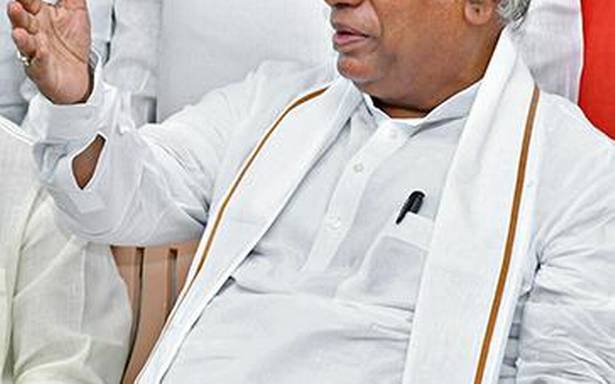 Senior Congress leader M. Mallikarjun Kharge has alleged that the Election Commission (EC) was working in favour of the Bharatiya Janata Party.

He was speaking to presspersons after paying tribute to former Prime Minister Rajiv Gandhi on his 28th death anniversary at the District Congress Committee office here on Tuesday. Mr. Kharge alleged that the EC had maintained silence on Prime Minister Narendra Modi’s trip to Kedarnath temple in Uttarakhand, which was a clear violation of the model code of conduct.

“How can the EC allow media coverage of Mr. Modi’s spiritual trip during elections? The BJP’s move is well calculated to influence voters even on the day of polls,” he said.

Replying to a question, Mr. Kharge said that a decision on the future move would be known only after the Lok Sabha poll results are out. “The exit polls predicted that the BJP would get a comfortable majority in parliament to form the government, but I don’t trust the exit polls and people are being manipulated,” he said.

Criticising Mr. Modi’s comment that Congress would not cross more than 40 seats, Mr. Kharge termed it as a “premature statement” and raised doubts over the election process. He alleged that the BJP would have manipulated the electronic voting machines (EVM).

Irked over former Minister Roshan Baig’s claim that KPCC State unit president Dinesh Gundu Rao and Congress Legislature Party leader Siddaramaiah should be blamed for the “flop poll campaign” in the State, he said Mr. Baig being a senior leader and behaving in such a manner is uncalled for.

05/22/2019 India Comments Off on EC working in favour of BJP, alleges Kharge
India