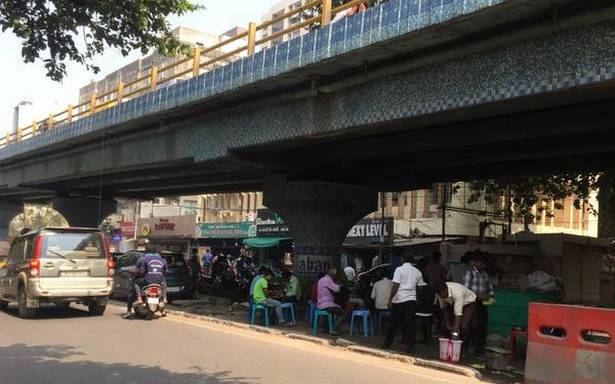 Open spaces below flyovers are either hotspots for unauthorised parking or makeshift eateries. The flyover on Pantheon Road in Egmore is the latest victim of this growing menace in the city. A row of plastic chairs, water drums, pushcarts, stoves and cooking materials have taken up all the space below the flyover.

At a superficial glance, it may not appear to be problematic, as the eateries have confined to the “boundary” of the flyover. But take a closer look, and you will spot gas cylinders left carelessly at some corner and burning stoves cooking a variety of dishes. Danger is written all over it.

Next comes the traffic chaos. Those who flock to these eateries for a quick bite, often park their vehicles on the roadside blocking way for other motorists. “The road below the flyover is already narrow and with the vehicles parked along the side, the congestion is getting worse, especially during lunchtime,” says K. Akash, a motorist from Royapettah.

Motorists complain that the eateries cropped up a few weeks ago and neither the authorities of the Greater Chennai Corporation nor the Chennai City Police have taken any action to remove them. “It is not only an encroachment of a public space but also a threat to safety of motorists and public property. If in case a fire breaks out, it will threaten the museum, which is a heritage structure. Why haven’t the police taken any action,” asks another motorist.

An official from the Government Museum, seeking anonymity, says that there are about a dozen such eateries below the flyover, between the Co-optex showroom and the main entrance of the museum, where vehicles take a right-turn to Red Cross Road. “Other empty spaces below the flyover have become a junk yard for abandoned vehicles. Mangled autorickshaws, cars and two-wheelers are rusting under the bridge. This space should be fenced and landscaping the area will prevent further encroachments,” says the official.

Hundreds of motorists from Anna Nagar, ICF, Villivakkam, Chetpet, Nungambakkam, Egmore, T. Nagar, Vadapalani, Kilpauk and Purasaiwalkam use Pantheon Road every day. Motorists from Nungambakkam, Kodambakkam and Choolaimedu usually prefer this route over the congested Kodambakkam High Road via Gemini flyover. Besides the museum, the stretch is also home to other important facilities such as Tamil Nadu Medical Services Corporation Limited, Government Women and Children Hospital, and shopping malls and banks.

“Steps will be taken to remove the encroachments soon,” says a Corporation official.

Related posts:
11/09/2019 India Comments Off on ‘Eateries below flyover on Pantheon Road, a recipe for disaster’
TV & Movies