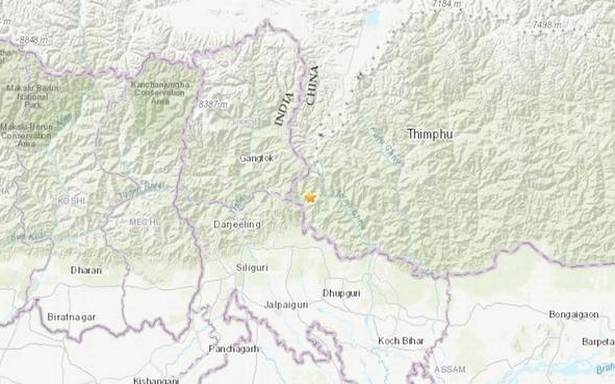 An earthquake measuring 5.4 on the Richter scale struck the Sikkim-Bhutan border at 8.49 p.m. on Monday. The epicentre was recorded at longitude 88.84 degrees East and latitude 27.23 degrees North. The tremors were felt in the districts of north Bengal including Siliguri, Malda and Darjeeling districts.

People rushed out of their homes but there were no reports of any damage.

Chief Minister Mamata Banerjee is in north Bengal for campaigning for the fourth phase of polling. Governor Jagdeep Dhankhar called her to enquire about her safety.

“Had telephone conversation @MamataOfficial to enquire her well being as 6.1 [5.4 as per Indian Meteorological Department] earthquake tremors felt in north Bengal. Hon’ble CM is at Siliguri presently. Relieved to learn all well at her end. The epicentre of the earthquake was 25 km east-southeast (ESE) of Gangtok, Sikkim,” Mr. Dhankhar said on social media.