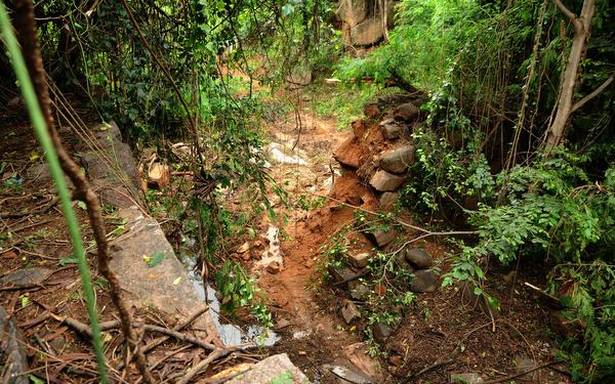 GHMC creating a channel to drain the water from Shahatam Cheruvu, which is flooding colonies that came up inside its full tank level

The Greater Hyderabad Municipal Corporation deployed an earthmover to cut through the Golconda Fort’s moat on its northern side Sunday. “We are creating a channel to drain the water from the Shahatam Cheruvu. The old channel is blocked due to which houses are flooded on the other side,” said a GHMC employee supervising the work. Chunks of the moat wall were strewn at the site on Monday after the earthmover was moved out of the site.

“Please consider the humanitarian aspect. Many houses will get flooded if this is not cleared,” said Sanauddin, a GHMC official supervising work on Monday, who promised to show the No-Objection Certificate issued by ASI but did not. “We are cleaning the silt to restore the old channel,” said Mr. Sanauddin, but could not explain why an earthmover was required to clean silt in a clogged water channel. “They are saying they got the NOC from Delhi in March. I will have to check our documents,” said an ASI official.

About 100 metres from the site of the old sluice gate, the GHMC has made another intervention by laying a pipeline to drain the water from the Shahatam Cheruvu and now water from the lake gushes into the Naya Qila raising froth and a foul odour.

“Our houses will get flooded if this channel is not created. Our problem became worse after 2000. Every year our houses get flooded. In some areas the water rises to the second floor,” said a resident pointing to his house on the other side of the lake. Every monsoon is a trial by water for the residents of Nadeem Colony, Virasat Nagar, Raghava Colony, Vali Colony and other areas that have come up recently on the foreshore of the Shahatam Cheruvu. A big chunk of the land abutting the road has been reclaimed and is used by the Hyderabad Golf Club to park its vehicles. The lake has shrunk to nearly half the size from 70.8 acres to 40 acres in 2014. Many of the constructions are inside the full tank level. It is these constructions that get flooded whenever there is heavy rain.