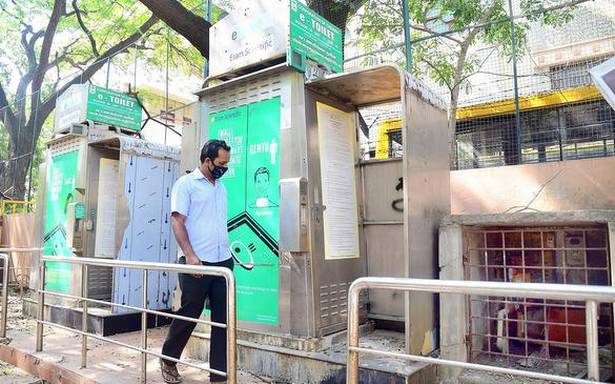 Government starts such projects with great fanfare but over a period forgets about maintaining it; an app to track these toilets has become defunct, say residents

When the concept of e-toilets was first introduced in Chennai five years ago, it was touted as one that required minimal maintenance and the public could always count on it to be clean.

But a visit to over a dozen of these toilets showed broken taps, cracked structures, no water, foul smell and stains all around.

Take the case of the e-toilet situated at the entrance of Bagavandham Street in T.Nagar. The flower vendors here have to bear the stench that comes out from the toilet on a daily basis. Residents say it is cleaned rarely and only upon request. And there is no water most of the time. This toilet is located close to two schools and opposite a temple, but no one uses it because it is kept untidy.

“With COVID-19, the Corporation should be extra cautious about cleaning these places. Look at the mosquitoes around the toilet,” said Ramu, a resident. He also said that there was an app to track these toilets and that has become defunct too. “The government starts such projects with great fanfare but over a period forgets about maintaining it,” he lamented.

At some of the e-toilets, there were condoms, empty liquor bottles and needles. Residents and shopkeepers said the e-toilets are being misused at times for other purposes. Pointing at an e-toilet next to the Vidyodaya School, the owner of a commercial establishment on Thirumalai Pillai Road said that school / college going students get inside these spaces, drink and dump bottles. This particular e-toilet was clogged. And between the men’s and women’s toilets there were 10-15 empty liquor bottles.

The e-toilet right opposite the Greater Chennai Corporation divisional office on Velachery Main Road near the Dhandeeswaram temple pond was worse. This non-functional e-toilet has become a spot for open urination. R. Maasaanam, who resides in the locality, said that people stopped using it as there was no water in the overhead tank most of the time. “The doors will not open if there is no water. Hence, people started urinating outside,” he said. The electronic indicators outside the toilet appeared fully damaged. While one of the doors appeared broken, the other was jammed.

Of the two e-toilet units near the Metropolitan Magistrate Courts complex in Egmore, one appeared to be partially functional while the other was dysfunctional. “There is no maintenance. On weekdays, when there is more crowd in the area, everyone urinates near the toilet as the doors mostly remain jammed,” said M. Dinesh, an autorickshaw driver.

An e-toilet in Anna Nagar West has been closed from the time the COVID-19 pandemic broke out and continues to remain under locked as there is no water supply. One of the e-toilets in T.Nagar was completely covered with creepers and plants and was rusting.

In many places, the public pointed out that there was absolutely no requirement for an e-toilet in that zone. They suggested that the Corporation should remove it and install it at places where there was a need.

12/26/2021 India Comments Off on e-toilets, most of them dysfunctional, present picture of neglect
India