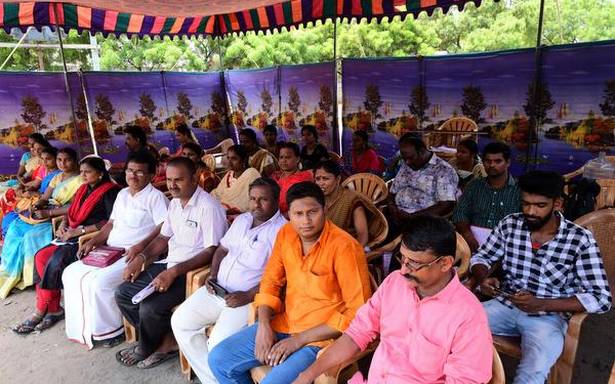 Members of Union of Information Technology and Information Technology Enabled Services Employees (UNITE) observed fast near Government Siddha Medical College in Palayamkottai on Friday demanding hike in salary and in protest against the amount being deducted from their monthly salary without any social security benefits.

The protesting members of UNITE said the E-Seva Centres of Tamil Nadu, which is being administered by Tamil Nadu Government Cable Television Corporation and manned by a few thousand properly recruited skilled workers, were playing a crucial role in issuing a range of certificates including birth, death and community certificates and Aadhaar cards.

Even as E-Seva Centre workers of Tamil Nadu are drawing a monthly salary of ₹7,675, the Kerala Government is giving ₹24,000 as monthly salary for a similar work. At the same time, deduction raging from ₹2,000 to ₹5,000 was being done since September 2018 by the Tamil Nadu Government Cable Television Corporation from the paltry salary they were getting.

“Since indirect efforts are on to privatise the E-Seva Centres, the officials don’t release sufficient funds for maintaining the services by providing toners and papers to be used in the printers. Moreover, interruption in ínternet is not being attended immediately. Consequently, those who are manning the centres have to face the people’s wrath,” the protestors said.

They also complained that the centre workers cannot avail themselves of the benefits of Employees’ State Insurance Corporation though a prescribed amount is being deducted from the salary. Similarly, money cannot be drawn from their provident fund accounts even to meet emergency needs.

“Hence, we’re observing a fast urging the Tamil Nadu Government Cable Television Corporation to disburse the huge sum of money deducted from our salary every month. The monthly salary should be increased to ₹18,000 besides regularising the services of those who have put in several years of service at the E-Seva Centres, they said.