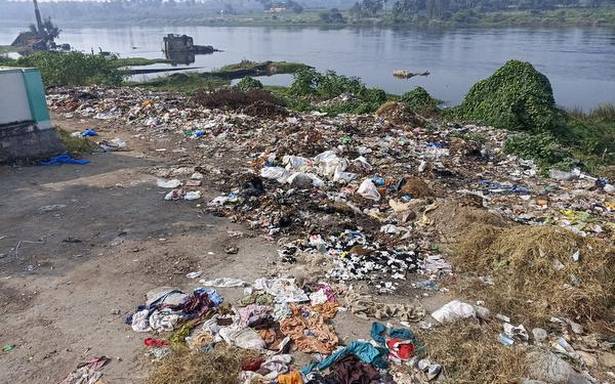 Dumping of household and industrial waste on the Cauvery River bank at Kokkarayanpettai in Tiruchengodu taluk and setting it on fire continues to be a perennial problem that causes air and water pollution.

As per Census 2011, there are 1,715 houses in Kokkarayanpettai with a population of over 6,500. In the absence of proper solid waste management, waste collected from houses by the conservancy workers are taken in pushcarts and dumped along the river. “Dumping of waste has been continuing for many years now”, said a motorist who pointed out that burning of garbage, that mostly comprise plastic, causes air pollution. Also, commercial establishments and poultry shops located at Four Roads Junction, dump the waste on the river bank regularly.

Debris, poultry waste, waste from hotels, industrial waste, used dress materials and other waste are dumped regularly and set on fire. The dump yard is located along the Outer Ring Road that connects Kokkarayanpettai with Thindal in Erode district. Since vehicle flow is frequent on the road, smoke from burning garbage that constitutes plastic affects two-wheelers and other motorists, said Sampath, who uses the road every day. He said that the panchayat had earlier placed a board asking people not to dump the waste and warned that action would be taken. “But, conservancy workers dump the garbage regularly here”, he added.

Motorists said that since the river is located less than 100 metres from the Four Road Junction, shopkeepers and others find it convenient to dump the waste throughout the day as there is no monitoring or action by officials.

Motorists said that garbage was washed away in the water when the discharge in the river was high, a few years ago. They wanted a permanent solution to the problem as the river water is used by lakhs of common people and by farmers in delta districts.