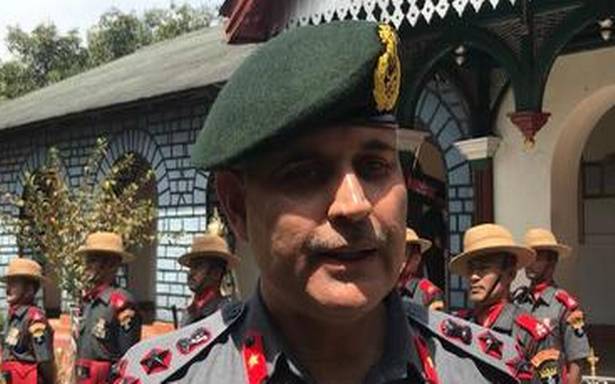 A major anti-drug drive was launched by Assam Rifles in cooperation with State govt., local NGOs

Mizoram being a dry State, cheap and easy availability of drugs has a wide impact on the society and Mizoram has the highest percentage of drug addicts, said Brigadier Digvijay Singh, Commander 23 Sector, Assam Rifles, responsible for Mizoram, talking of the steady increase in smuggling of narcotics and contraband from Myanmar and the widespread drug use in the State.

“Narcotics is a big challenge for us. But we are doing all that is in our hand. We are stopping all this. In the three months of 2021 alone, we have recovered narcotics worth almost ₹25 crore,” Brig. Singh told a group of visiting journalists end of last week. As per data available with law enforcement agencies, in 2020, 21 kg of heroin, 130 kg of marijuana and Methamphetamine tablets worth ₹47 crore were caught. Similarly, 190 smugglers were apprehended in 2020 while 53 were apprehended so far this year.

Mizoram also acts as conduit for transhipment of these drugs to other parts of the country owing to lucrative opportunities for unemployed youth, Brig. Singh said. “Assam Rifles is conducting anti-drug campaigns to create awareness among youth about ill effects of drugs.”

A major anti-drug drive was launched by Assam Rifles in cooperation with the State government and local non-governmental organisations. The other challenges faced by the force are enforcing the Free Movement Regime (FMR) and illegal movements across due to the porous and unfenced border, Brig. Singh added.

Apart from being easy substitute to alcohol, drugs are very easy to be concealed and carry, said Col. Viplav Tripathi, Commanding Officer of 46 Assam Rifles which is responsible for north Mizoram. “Also people are doing lot of business as a small quantity of drug earns big money. A Methaphetamine tablet, costs around ₹10-20 in the border areas, here is ₹350-500 and once it reaches mainland India for the festival season it costs ₹2,000,” he said.

As per data, Mizoram has been facing the drug menace since 1984 and a total of 1,645 people have died due to drug abuse till date. In 2020 alone, 67 people have died and 268 people were arrested on drug-related charges.

Yaba tablets, produced in the Wa state of Myanmar and which are in high demand in Mumbai, Delhi and Bengaluru, are smuggled through Mizoram, one officer said.

Recently, there has been a substantial increase in narcotic recoveries. Maj. Ram Vinodh said this was primarily due to the strong intelligence network of the Battalions which is able to downturn the trend.

Other than narcotics, the other items most smuggled are gold, wildlife, weapons, Indian currency and foreign cigarette among others. Mizoram is one of the fastest growing hubs of gold smuggling from China, the officer said, adding more than 8 kg of gold was recovered in Mizoram in 2020 and also about 70 kg recovered in other parts of country is believed to have gone through Mizoram. Around 30 AK-47s, two Chinese pistols, one air rifle, around 600 rifle scopes and about 1.5 lakh detonators were recovered in 2020, data show.

This is one of the insurgencies which went away with the stroke of a pen with the peace accord in 1985 and is now one of the most peaceful States in the north-east, said a second officer, adding, with the other States bordering Myanmar effected by insurgency, Mizoram is considered a safe option for smuggling of various kinds. The golden triangle of drug trade in South East Asia has now become the golden pentagon, the officer added.

Over 80% of Mizoram’s border is with Bangladesh and Myanmar with the Myanmar border stretching 510 km. It is also a hilly State with almost 89% of the land being mountainous.

03/24/2021 India Comments Off on Drug use, smuggling major challenges in Mizoram
TV & Movies