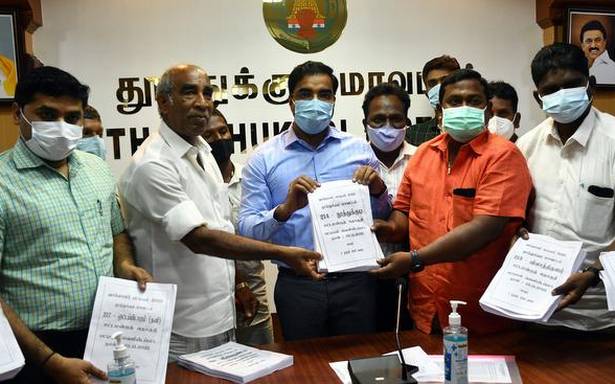 According to the Election Commission of India guidelines, the list would be kept for public view at all the designated offices in the district.

According to the draft electoral roll, which the Collector released in the presence of recognised political party representatives and senior officials including District Revenue Officer Kannabiran, Thoothukudi district has six Assembly Constituencies.

Speaking to reporters, Dr Senthil Raj said that special camps to enrol eligible voters would be conducted on four days – Nov 13, 14, 27 and 28 respectively from 9.30 a.m. till 5.30 p.m. at the respective polling stations. With the qualifying date being 1.1.2022 to enrol in the voter list, people can also register in the voter list through online – www.nvsp.in

The final voter list would be released on January 5, 2022.

Tenkasi Collector Gopala Sundararaj released the draft roll in the presence of DRO Janani Soundarya and other representatives of political parties at the Collectorate.

Speaking to reporters, the Collector said that 13,30,629 voters including 6,51,181 men, 6,79,413 women and 35 others were there as per the draft rolls. Apart from enrolling through the special camps to be held in the district during the ensuing month, Mr Gopala Sundararaj also said that people may download the voters helpline App on their mobile phones and register.

For any clarification, people in the district may contact 1950 toll free for any clarification. The Collector appealed to all the residents from the five Assembly Constituencies to check for their names on the voter list and ensure that they were correct.

In the event of registering any amends such as change of address within the constituency or outside, there were separate forms available. The public can download the forms from the ECI website and fill them and submit the same, the Collector informed.

The district had 1,483 polling stations and the Collector said that persons, who were eligible (above 18 years as on 1.1.2022) shall submit forms with the respective officials. After duly carrying out enumeration, they would be included in the voter list.

For those, who have either shifted to the district from other cities, may submit for inclusion of their names either through online or by visiting the nearest designated offices.

Speaking to reporters, he said that the final voter list was released on March 19 before the Assembly elections and Lok Sabha by-poll held then. The draft electoral roll would be kept on display for public view at designated offices including at the Collectorate.

Apart from the special camps to be held during the month to enrol eligible persons as per the ECI, people can also utilise the website for online registration for the six Assembly Constituencies namely Kanniyakumari, Padmanabapuram, Nagercoil, Colachel, Vilavancode and Killiyur.

District Revenue Officer Sivapriya and other senior officers from the revenue and election wing and representatives of various political parties were present.