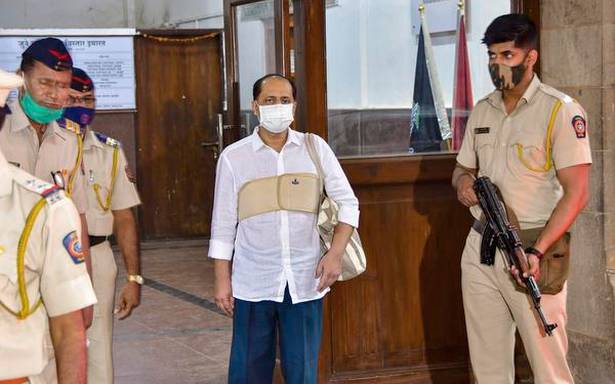 The former Police Inspector appeared before a judicial commission

Mr.Vaze, the main accused in the Antilia explosives case was brought before retired justice K.U. Chandiwal from Taloja Central Jail and was cross examined by advocate Anita Castellino representing Mr. Deshmukh. She asked Mr. Vaze about procedures for police officials to go to the Mantralaya in the presence of Mr. Deshmukh. He is lodged at the Arthur Road Jail in the money laundering case against him by the Enforcement Directorate.

When questioned Ms. Castellino asked Mr. Vaze if he had met Mr. Deshmukh only for official purposes, he said "Yes" and when she asked him if he ever visited Mr. Deshmukh unofficially, he said, "Don’t remember".

Ms. Castellino sought time to question him further and the next hearing is scheduled on December 13. Meanwhile, the Commission permitted Mr. Vaze a production warrant to meet his lawyers. The Chandiwal Commission was constituted in March 2021, to inquire about corruption allegations made by former Police Commissioner Param Bir Singh against Mr. Deshmukh.

On November 30, Mr. Vaze had told the commission that he was harassed, humiliated and made to sign documents by the National Investigation Agency (NIA). The encounter specialist said he was traumatised. He had also said when he was in the NIA custody that he was forced to sign many documents, under duress, which were not even given back to him.