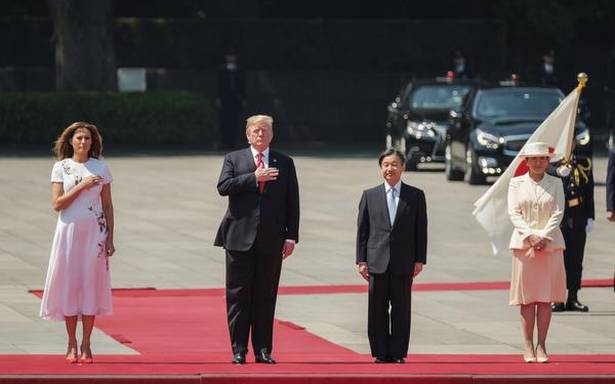 Under a blazing hot sun at Japan’s Imperial Palace, President Donald Trump on Monday became the first world leader to meet the new emperor of Japan.

The president, who is on a four-day state visit, was the center of attention at a grand outdoor welcome ceremony where he took a solo walk down red carpets, reviewing Japanese troops as the guest of honor. The pomp and pageantry then gave way to meetings with Japanese Prime Minister Shinzo Abe about trade and other world issues.

Trump’s “state call” opened with handshakes and greetings from Naruhito, who ascended to the throne on May 1, and his wife, Empress Masako.

As he approached the emperor, Trump said, “How are you? Thank you very much.” The first lady told the empress, “Nice to meet you.”

After exchanging pleasantries inside the palace, the couples emerged and walked to a raised platform as the national anthems of both countries were played.

Switzerland’s Roger Federer celebrates winning against Italy’s Lorenzo Sonego during their first round match of the French Open tennis tournament at the Roland Garros stadium in Paris.

Swiss tennis star Roger Federer made a triumphant return to French Open after three-year absence, easing past Italy’s Lorenzo Sonego in straight sets in the men’s singles first round, while fifth-seeded Angelique Kerber was shocked by Russian teenager Anastasia Potapova in the women’s singles here.

Federer enjoyed one-sided ovation from the crowds in a redecorated Court Philippe Chatrier on Sunday, while competing at the clay major for the first time after 2015, Xinhua reported.

"The reception I got today was crazy. It was really nice to see a full stadium for a first round like this. It was a beauty. So I’m very, very happy," Federer told a news conference.

The Swiss third seed used one hour and 41 minutes to overcome Sonego 6-2, 6-4, 6-4 through 36 winners, setting up a second round encounter with Germany’s Oscar Otte.

(With inputs from agencies)