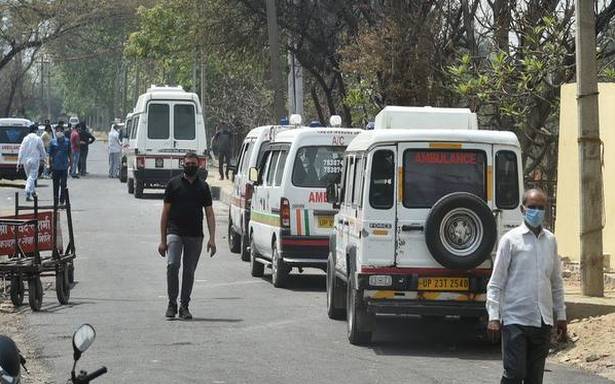 The deceased was employed as an orderly in the district judge’s court of Ghaziabad and was tested COVID-19 positive on Thursday.

Adding to the misery of the family members of a 51-year-old man who died of COVID-19, his body kept in a queue at the Hindon crematorium was gnawed by a stray dog.

The deceased was employed as an orderly in the district judge’s court of Ghaziabad and was tested COVID-19 positive on Thursday. After he developed breathing problems, he was admitted to the civil hospital.

Triloki Singh, a colleague, said that the patient was under treatment but his condition deteriorated and he was referred to Santosh Medical College on Saturday evening. He showed sign of improvement and his oxygen reached to 80 from 40. But after few hours, his oxygen level again fell to 30 at around 11 pm. At 1 a.m. on Sunday, he suffered cardiac arrest and doctors declared him dead. The hospital handed over the body to the family as per COVID-19 protocol by wrapping it in a PPE kit and a piece of polythene.

“We kept trying for ambulance from 1.30 a.m. onwards and finally managed to arrange one by around 8 a.m. We had reached Hindon Cremation at around 8 a.m. and we were informed that token will be given at 10 am because they already have bodies in queue and platforms are occupied,” said Mr Singh.

Family members told that they kept the body in a queue and they went to stand under the shade as it was hot and a staff member of crematorium informed them that their turn would come by 6 pm as several bodies were in “queue” for cremation.

“At around 2 pm, a passerby informed that a dog was gnawing at a body kept in queue and had eaten the face. Many people who had come with their bodies and waiting for their turn rushed to find out what had happened. We found that a dog had torn through the PPE kit of the body and had eaten a part of the face. We immediately raised the matter with district administration staff at Hindon. We managed to cremate the body at 3.30 p.m,” said a relative, who wished not to be named.

He added that after this people at Hindon staged a protest and demanded immediate intervention of senior officers. The staff made them speak to a senior officer, who promised to fence the area to prevent entry of stray animals.