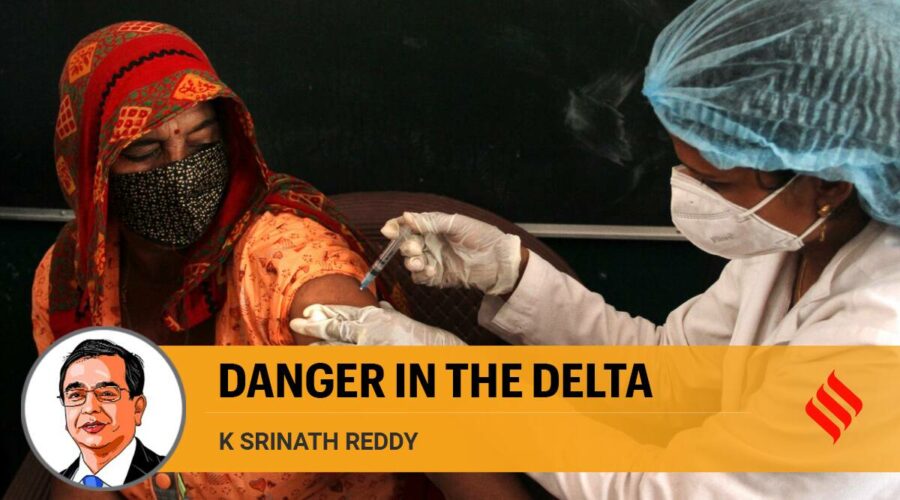 K Srinath Reddy writes: Putting together the trials, post-vaccination studies and the real world experience of post-vaccination infections, it is clear that spacing out the doses is not rational The World Health Organisation (WHO) must be thanked for giving us relief from the jumble of alphabet and number codes inflicted on us as identity markers for the many variants of the SARS-Cov-2 virus. Given the difficulty of remembering and pronouncing those memory manglers and tongue twisters, most people had fallen into the undesirable habit of identifying the variant by the name of the country or province from where it was first reported. The government of India rightly protested against such stigmatising use, as did other labelled countries.

Just two days after the WHO renamed the variants with letters of the Greek alphabet, a consortium of Indian scientists announced that the Delta variant is responsible for the severe second wave in India. First identified in Maharashtra, it was previously labelled as B.1.617.2. It has now spread to most parts of India and also been identified in many other countries. This rapid global spread has led to the WHO graduating it from a “variant of interest” (VOI) to a “variant of concern” (VOC).

Doctors in Mumbai were asserting, even from March, that this variant is responsible for the rapid surge of cases in that city. However, low levels of genomic testing made it difficult to quantify its contribution to the second wave. Enough data has now accumulated for Indian scientists to assert that the Delta variant is indeed the culprit contributing to the high surge of the second wave.

These conclusions have been recently presented by the Indian SARS-CoV-2 Genomic Consortia (INSACOG) and the National Centre for Disease Control (NCDC). They say that the Delta variant is the “prime reason” behind the second wave, though the wave may have been initiated by the Alpha variant (B.117) which emerged in Britain and was noted by early January to have entered India. The Alpha variant was noted in Britain to be 70 per cent more infectious than the original wild virus. Now the Delta variant has become dominant even in Britain, where scientists have recently noted that it is 50 per cent more infectious than the Alpha variant.

When a VOC emerges, there are three questions. Is it more infectious than the prevalent virus? Is it more virulent? Is it more resistant to the effect of vaccines? There is now strong evidence for declaring that the Delta variant is the most infectious variant in circulation. There is, as yet, no convincing evidence that this variant is more virulent. However, there are worrying reports from Britain and France that vaccines have diminished efficacy against the Delta variant.

Clinical trials of the vaccines approved in the UK were completed in 2020, when VOCs had not emerged as major threats. So, the efficacy of those vaccines against the variants could only be tested initially in the laboratory, where neutralising antibodies developed by vaccinated individuals were pitted against the mutated viruses. The antibodies represent only a part of the wide spectrum of immunity.

Another study from Britain, published in the Lancet on June 3, reinforces concerns of a single dose vaccination strategy against the Delta variant as well as the Beta variant (B.1.351) first identified in South Africa. This study of neutralising antibodies in persons vaccinated with the Pfizer-BioNTech vaccine observed that only 32 per cent of the vaccinated individuals had adequate antibody levels against the Delta variant after the first dose. Against the Beta variant, only 25 per cent had adequate levels of neutralising antibodies. Antibody levels improved after the second dose, though they did not match the very high levels of protection seen against the wild virus.

Authors of the Lancet study express concern about delaying the second dose of the vaccine. Britain had gone in for the policy of delaying the second dose, so that more persons can be vaccinated during a surge. That worked satisfactorily when the dominant microbe was the original virus. With the VOCs now active, especially with the Delta variant dominant, the authors recommend a shortened dosing interval. Britain has recently reduced the interval to 8 weeks from 12 weeks, due to these concerns.

Another recent report from the Pasteur Institute, France, reported on the efficacy of antibodies from vaccinated persons, convalescent sera, and also of a variety of synthetic monoclonal antibodies, against the Delta variant recovered from a person who had returned from India. Of those vaccinated, 16 had received the Pfizer-BioNTech vaccine and 12 received the AstraZeneca vaccine. The study reported that the Delta variant showed reduced response to both vaccines and was resistant to neutralisation by some monoclonal antibodies targeting the Spike protein. More worrisome, the authors state “Sera from individuals having received one dose of AstraZeneca Vaxzevria barely inhibited B.1.617.2.” They further conclude “Altogether, our results suggest that a single dose of AstraZeneca vaccine will not display an optimal protection against B.1.617.2.”

Putting together the clinical trials, post-vaccination studies of antibodies against variants, and the real world experience of post-vaccination infections, the conclusions are clear. A single dose of either the AstraZeneca or the Pfizer-BioNTech vaccine does not provide adequate protection against the D variant which is dominant in India. Two doses provide better protection. Shortening the dosing interval for the AstraZeneca vaccine to 8 weeks is the right response to that variant, based on current scientific evidence. If the Pfizer-BioNTech vaccine becomes available in India, those doses too should be administered with a 4-8 week interval. Wider spacing of vaccine doses does not appear rational against the D variant.

This column first appeared in the print edition on June 11, 2021 under the title ‘Danger in the Delta’. The writer, a cardiologist and epidemiologist, is President, Public Health Foundation of India (PHFI). Views are personal.

06/11/2021 India Comments Off on Does wider spacing of vaccine doses really work against the D variant of SARS-CoV-2?
India