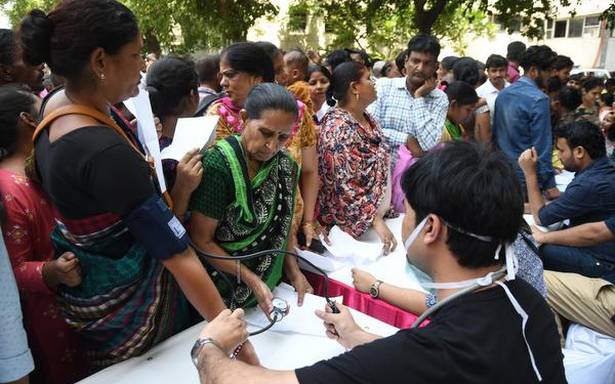 Resident doctors at North Delhi Municipal Corporation (NDMC)-Hindu Rao Hospital called off their strike on May 21 afternoon following assurance by the hospital authorities to credit their salary.

The doctors have been on strike from early this week demanding release of their salaries pending for three months. The Delhi government on May 20 released ₹206 crore to the cash-strapped civic body. NDMC commissioner Varsha Joshi thanked Delhi government for release of the funds in a tweet. “Grateful to Delhi Govt for finally having released the first quarter Basic Tax Allocation for the current financial year, which was due in April, over a month and a half after the file was processed within the concerned Del Gov department. Hope other dues are also released soon,” Ms. Joshi tweeted.

Hindu Rao is among the largest hospital operated by the civic body, which blames the Arvind Kejriwal-led AAP government for its financial crisis, which, it claims, is the cause for this situation. The North Delhi Municipal Corporation is run by the BJP.

In a statement on May 19, 400 resident doctors said: “We have persistently requested our administration for basic demands like receiving our salaries on time (delayed more than three months), protection from the violence, availability of potable drinking water, a 24-hour library and regular JR/SR interviews.”