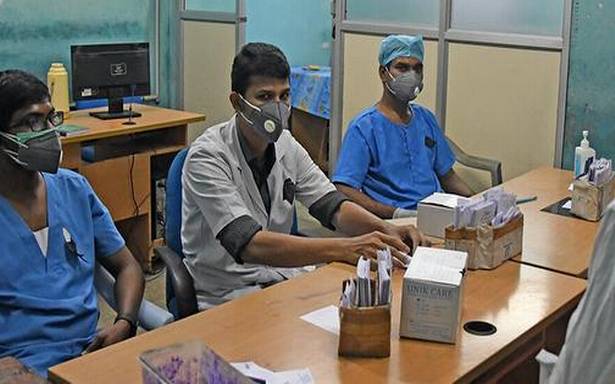 Association demands resumption of counselling and payment of due incentives

The Tamil Nadu Government Doctors’ Association has given several suggestions to contain the spread of COVID-19. It suggested that organisations volunteering to administer vaccines should be given a target to inoculate a certain number of persons through mass vaccination drives. This would help to achieve herd immunity and thereby prevent the spread of the infection, the association said.

The government should ensure that groceries and essentials reach the doorsteps of residents, instead of them having to visit shops and market. Shops should be permitted to function for specific hours in the morning and evening to prevent crowding.

The association appealed to the government to install plants for manufacture of liquid oxygen in hospitals and sufficient stock of protective equipment, such as PPE kits, N95 masks, gloves and sanitisers for healthcare professionals working in the COVID-19 wards.

The government should expedite the promised incentive of a month’s salary to doctors treating COVID-19 patients, the association urged. The Health Department had suspended the annual counselling, citing election. Even those who had completed the process were denied a salary hike due to the imposition of the model code of conduct.

Several government medical colleges were yet to pay salary for March, said K. Senthil, association president. Those transferred or promoted had not received their salaries due to administrative issues. The government had also not conducted postgraduate doctors’ counselling yet, he said.

Doctors employed in institutions under the Directorate of Public Health had been denied salary as the online biometric attendance was not properly implemented.

The association wanted the government to ensure that doctors, who work in COVID-19 wards, were given seven days of quarantine after they complete their ward duty. In many places, they were only given as little as three days, Dr. Senthil added.

The association demanded that doctors should not be unnecessarily faulted in the pretext of conducting monthly death audits or audits of those dying due to COVID-19 infection or during childbirth. Such acts of the government were demoralising for the 18,000 doctors working selflessly during the pandemic.