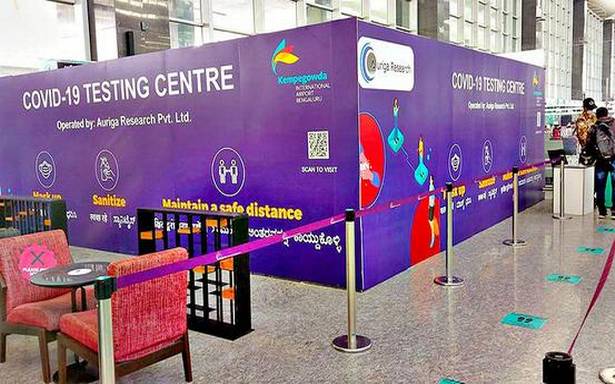 Both detected in Karnataka; symptoms mild; Indian patient has no travel history.

India has confirmed two cases of the Omicron variant of coronavirus in Karnataka. One is a 66-year-old South African national and the second, a 46-year-old Indian doctor from Bengaluru.

Both have reportedly “mild symptoms.” Bruhat Bengaluru Mahanagara Palike Commissioner Gaurav Gupta said in Bengaluru that the Indian had no travel history.

Also read | Omicron may have been in Karnataka much earlier: Experts

The announcement was made following confirmation from the Indian SARS-CoV-2 Genomics Consortium (INSACOG) that monitors the genomic variations of the pandemic.

The Indian developed fever and body ache on November 21 and underwent the RT-PCR test at a hospital on November 22 when he tested positive for COVID-19.

Karnataka Health and Medical Education Minister K. Sudhakar said the person was under home isolation till November 24 and was admitted to a hospital on November 25. He was discharged on November 27.

“We have tested 13 of his primary and 205 secondary contacts. Of these, three primary contacts and two secondary contacts have tested positive. They have been isolated, and their samples have been sent for sequencing. Although all the six, including the doctor, are clinically stable, we have admitted them to a government dedicated facility for further treatment and observation,” the Minister said.

The South African national left for Dubai on November 27 after testing negative. He came to India on November 20, and was quarantined in a hotel. As many as 24 of his primary, and 240 secondary contacts were tested, and found to be negative. They were still under watch, the Minister said.

Genome sequencing experts, who declined to be identified, said it was a matter of concern that the Bengaluru resident had been infected with the Omicron variant without any travel history. Sources said he might have attended some conference where he would have come in contact with foreign returnees. “That has to be traced and tracked now,” the sources said.

Mr. Sudhakar claimed that Karnataka acted quickly to detect the new variant. “We are prepared to handle the situation. Karnataka Chief Minister Basavaraj Bommai met the Union Health Minister in Delhi on Thursday and discussed the issue with him. He will hold deliberations with top officials and experts after his return to Bengaluru on Friday. As per his directions, we will intensify screening and testing at airports,” he said.

Omicron has been designated a Variant of Concern (VoC) by the World Health Organisation (WHO).

Confirmed reports of the presence of the variant were known on Wednesday night, Lav Agarwal, Joint Secretary, Union Health Ministry, said at a briefing in New Delhi on Thursday.

The way forward is for those unvaccinated to get vaccinated and for people to complete their scheduled doses and observe COVID-appropriate behaviour, said V.K. Paul, NITI Aayog member.

So far the Omicron variant has been confirmed by the WHO in at least 23 countries, with the bulk of them in South Africa. Omicron is confirmed to be highly infectious but it is unknown if it makes COVID-19 more severe. The most striking aspect of the variant is the large number of mutations on its spike protein, several of which have been linked to helping the virus evade antibodies, thus probably, making it more infectious. In less than a month, Omicron has been linked to at least 74% of the new cases in South Africa. By comparison, the mostly globally widespread Delta variant took over 100 days.

Watch | All about the new Omicron coronavirus variant

In the last 24 hours, South Africa reported 8,561cases and 28 deaths, with 6,168 of those cases confirmed from the Gauteng province, which has seen the maximum surge of the Omicron variant. Most of these cases are in younger age groups and it will be a few weeks before evidence emerges of its link with severe disease.

India has so far administered 125 crore doses of vaccine with about two thirds being first doses. Only a third of Indians have been fully vaccinated and about 60% have got at least one dose. Since the week October 9-15, the number of second doses has been exceeding the first dose and the Government is far short of meeting its stated target of vaccinating all adults — 94 crore — by the year end.