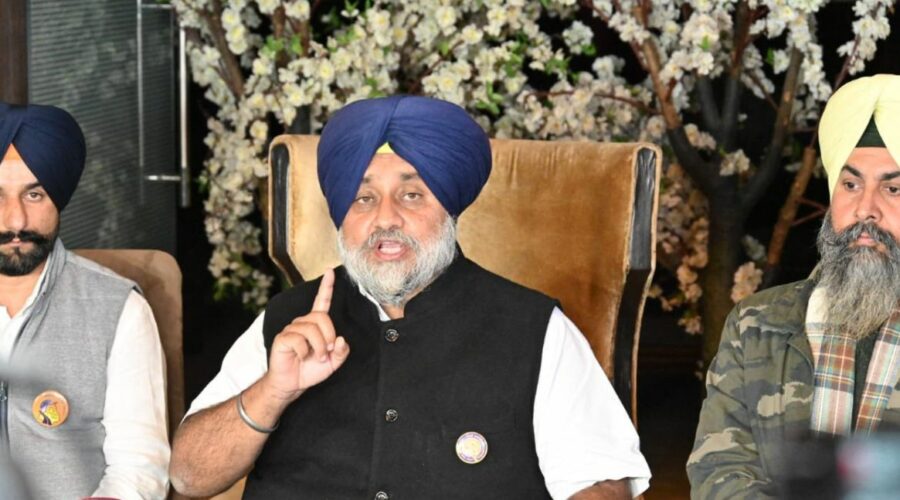 ‘I won’t be surprised if a third alternative to Badal and the Congress is swept to power in Punjab in 2022.’

In recent days, as Sukhbir Badal traversed one constituency after another in the border districts of Punjab, the well of supporters around his convoy gave the impression that the Shiromani Akali Dal had rediscovered its mojo.

The 59-year-old Badal has clocked multiple rallies a week in December, crisscrossing the state, with some partymen even surprised at the renewed vigor.

The Akalis were the first to kick off their election campaign, spell out an agenda for the future and announce the most number of candidates ahead of any other party.

With renegade Congressman Amarinder Singh now announcing a tie-up of his Lok Congress Party with the BJP, Badal is faced with an unprecedented three-pronged challenge.

Till now the focus of his attacks was just the Congress and Arvind Kejriwal.

“Punjab has to be governed by Punjabis from Punjab. You cannot remote-control the state from Delhi that people like Rahul Gandhi and Arvind Kejriwal intend to do,” said Naresh Gujral, the Akali Dal’s Rajya Sabha MP.

There is certainly wind behind the sails of Badal this time.

The Akali Dal created history in 2012 when, for the first time, it retained power successively in the state.

This time, the double whammy of anti-incumbency and fratricide — afflicting the Congress — has given the Akali Dal a chance to resurrect itself from the devastating results of the past.

In 2017, it was ousted by AAP as the principal Opposition party.

In the 2019 parliamentary polls, the Akali Dal managed to secure the same number of seats as the BJP, its junior partner in the now defunct coalition.

Badal has been keeping up the tempo at his unceasing election rallies over the last year.

His speeches have focused on key issues: Bringing industry to the state while maximising farmer gains and to stem unemployment.

They also include reforming the decrepit power sector and cracking down on illicit liquor and drugs in the state.

The Congress, despite appointing a Dalit as CM, is facing a tough challenge to repeat what the Akalis did in 2012.

In a bid to counter the Congress-Dalit move, Badal has exhorted that he would pick a Dalit as his deputy CM if voted to power.

Punjab has the highest proportion of Dalits in India and they are further divided into multiple sub-castes.

This gives Badal equal if not more traction than the Congress among the community.

Its alliance with the Bahujan Samaj Party, though unprecedented, is not being seen as a game changer.

“The BSP, despite its presence, doesn’t have acceptability among Dalits in Punjab. Channi is largely perceived as a night watchman of the Congress instead of a symbol of Dalit assertiveness,” said Pampa Mukherjee from the department of political science at Panjab University.

State watchers say the Akalis will be aided by other factors as well.

It is seen as aligned with the farmers’ cause in the state by virtue of splitting up with the BJP.

Furthermore, a significant proportion of the land-owning Jat farmers, who went back home victorious after repeal of the farm laws, are a potential Akali constituency to be wooed.

Despite some external factors working in his favour, Badal has tough challenges ahead.

A more portent one may come from the AAP.

An acknowledgment of the party’s increasing popularity in the state as an alternative to both the Congress and the Akalis has been felt across the electoral spectrum.

Badal has consciously spent more time in his rallies, picking out Kejriwal, something that was earlier reserved exclusively for Congress leaders.

But the tough AAP challenge to Badal may not be unsurmountable.

“AAP doesn’t have a face in the state. Both Congress and AAP face the same dilemma — how not to be seen ruling Punjab from Delhi,” said Mukherjee.

With Amarinder stating that he would nominate candidates based on ‘winnability’ after his tie-up with the BJP, Badal also faces the prospect of attrition from his party’s grassroot ranks.

With many strong candidates having been denied tickets by both Badal and the Congress, the Amarinder-BJP tie-up is nothing short of a political lifeline thrown to candidates who were or will be left out in the lurch.

“Over the last couple of years,” Ashutosh Kumar of Panjab University said, “the loudest opposing voice for the Congress has been from within the Congress. With Navjot Sidhu’s constant attacks, the Congress was its only opposition. People remember that kind of self-critique mechanism as a form of principled politics.”

“He is no match for his father (Parkash Singh Badal), who oversaw Punjab’s evolution. The Akalis have lost their core Taksali (religious Jat Sikh) constituency under his watch. I won’t be surprised if a third alternative to Badal and the Congress is swept to power in Punjab in 2022.”