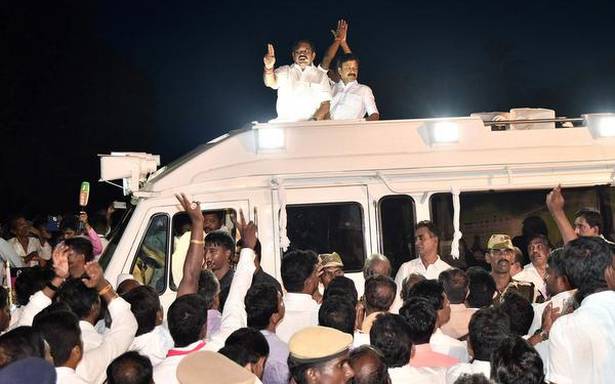 Party has no moral right to talk about corruption: CM

Chief Minister Edappadi K. Palaniswami on Saturday said the DMK’s efforts to dislodge his government will not succeed, and the AIADMK will return to power after the 2021 Assembly election.

Campaigning for M.R. Muthamizhselvan, the party’s candidate for the Vikravandi bypoll, at Mundiyampakkam, the Chief Minister said Opposition leader M.K. Stalin had predicted the downfall of the AIADMK government many times. But the government had completed two years and eight months of its tenure. "He will not be able to dislodge the government. Some people, who tried to break the party, are now nowhere on the political arena and have been left on the streets," he said.

"I became Chief Minister with the support of 122 legislators. From being an ordinary party worker, I reached this position due to hard work," the CM said, adding that this was not the case with Mr. Stalin.

Taking strong exception to Lok Sabha MP Kanimozhi’s statement alleging that the AIADMK government had “sunk deep into corruption”, Mr. Palaniswami said the DMK had no moral authority to talk about corruption as most of its former Ministers were facing allegations of graft.

"How are several prominent DMK members running educational institutions? They were all ordinary people in the beginning,” he said.

The DMK won the Lok Sabha election on the back of false promises and lies, he said, adding that the people will not get carried away by the party’s promises any more.