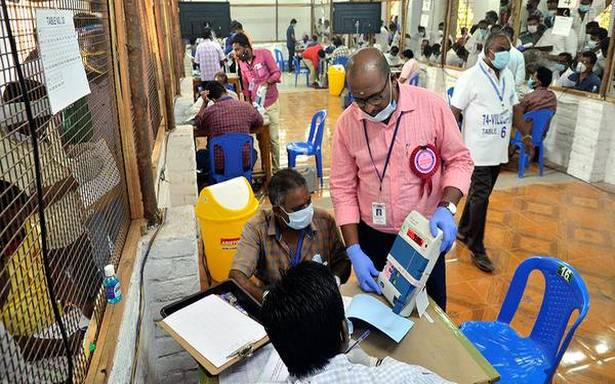 The DMK-led alliance has consolidated its position in the northern districts of Cuddalore, Villupuram and Kallakurichi by winning in three and leading comfortably in 11 more out of the 20 Assembly constituencies.

Tirukoilur Assembly segment in Villupuram district ushered in the first victory for the party with its MLA K. Ponmudi securing 1,10,980 votes against 51,300 votes polled by V.A.T. Kalivaradhan of the BJP. L. Venkatesan of the DMDK polled 13,997 votes while NOTA with 2,039 votes.

It was a neck-to-neck battle between Law Minister C.Ve. Shanmugam and R. Lakshmanan in Villupuram Assembly constituency where the AIADMK had a slender lead before ceding ground to the DMK. At the end of Round 17, Mr. Lakshmanan established a comfortable lead of 13,374 votes.

In Vikravandi, N. Pugazhenthi of the DMK polled 82,598 votes against 73,578 polled by R. Muthamizhselvan of the AIADMK at the end of 21 rounds.

The AIADMK was leading in Mailam, Tindivanam (Reserved) and Vanur (Reserved) Assembly constituencies.

At the end of 24 rounds of counting in Tindivanam, P. Arjunan of the AIADMK polled 85,495 votes against 75,439 secured by MLA P. Seethapathy of the DMK.

C. Sivakumar of the PMK, an ally of the AIADMK, polled 77,678 votes against R. Masilamani of the DMK who secured 73,930 votes at the end of 21 rounds in Mailam. In Cuddalore district, the DMK wrested the Cuddalore seat from the AIADMK. The DMK’s G. Iyappan polled 84,563 votes defeating Mr. Sampath by a margin of 5,151 votes.

M.R.K. Panneerselvam of the DMK retained the Kurunjipadi seat defeating his nearest rival Selvi Ramajayam of the AIADMK by a margin of 17,861 votes.

The AIADMK was leading in Chidambaram and Bhuvanagiri at the end of 27 and 25 rounds respectively.

In Kallakurichi district, the DMK was leading in three Assembly constituencies of Ulundurpet, Rishivandhiyam and Sankarapuram barring Kallakurichi where the AIADMK candidate was leading by a margin of 6,181 votes at the end of 14 rounds of counting.

05/02/2021 India Comments Off on DMK wins in Cuddalore, Villupuram
India