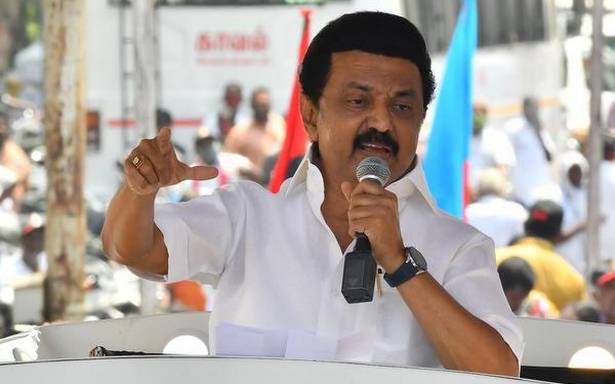 The BJP, which is protecting the AIADMK government, is trying to intimidate the DMK due to fear of losing the elections, the DMK president said, following reports of a raid at his son-in-law’s residence

The DMK will not be cowed down by the Income Tax Department’s searches [at the residences of his family members and party leaders] and the more such raids are conducted, the more will be the party’s resurgence, party president M.K. Stalin asserted in Jayamkondam on Friday.

The BJP, which is protecting the AIADMK government, is now trying to intimidate the DMK due to fear of losing the elections, he alleged, while campaigning in support of his party candidates for Ariyalur and Perambalur, in Jayamkondam on Friday.

“I just heard on my way that 30 IT officials with the protection of over 100 police personnel are conducting a raid at my daughter Senthamarai’s house (in Chennai). I wish to convey to Prime Minister Narendra Modi that this is DMK. I have even faced MISA and Emergency. I will not be cower before such threats,” he said.

The Centre has already browbeaten the ruling party through such raids in the houses of Ministers and the Chief Secretary earlier. It has been misusing the Income Tax Department and the CBI to threaten others and deprive the States of their rights, Mr. Stalin charged.

“They think that they can threaten and leave us cringing in our houses through such raids before the elections. But it will not work with DMK members,” Mr. Stalin observed pointing out that the searches were being held just three days ahead of polling and in the wake of Mr Modi’s visit to Madurai. “It may work with the AIADMK men, who are ready to fall at your feet surrendering the State’s rights,” he said and added that April 6 is the day when people will give a fitting reply to such actions.

Mr. Stalin asserted that the DMK had always been in the forefront in upholding social justice by providing and protecting reservation for backward, most backward, minorities, Scheduled Caste and Scheduled Tribe communities.

The AIADMK-BJP combine, on the other hand, was against social justice, he alleged and urged the electorate to ensure that not even a single AIADMK candidate won. Even if one of them wins, he/she will not be an AIADMK MLA but act as a BJP representative, “just as the son of Deputy Chief Minister O. Paneerselvam was acting after emerging the only winner from his party in the Lok Sabha election,” Mr. Stalin claimed.

Stating that he was reminded of Anitha, “who sacrificed her life for her educational right,” whenever he visited Ariyalur region, Mr.Stalin said that he had already established an Anitha Achievers Academy in his Kolathur constituency to train unemployed women and find them placement. Such academies would be set up in all districts acros the State once the DMK is voted to power, he said.