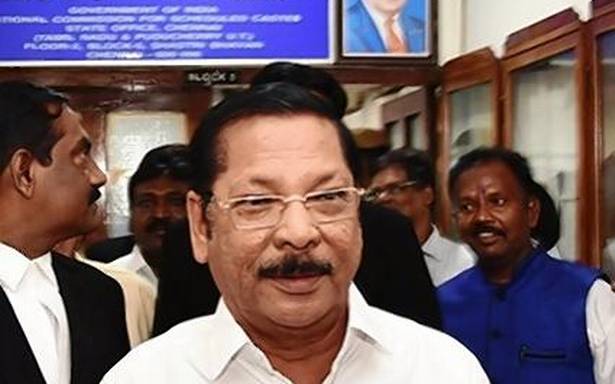 DMK organisation secretary R.S. Bharathi in a memorandum to the Governor alleged that there was a criminal conspiracy and corruption. He said the land was alienated without following prescribed process at a meagre rate for personal gain.

Mr Bharathi said 10.5 acres of government land in Koyambedu village, Chennai, was alienated in favour of Baashyam Constructions Pvt Ltd at a rate of ₹12,500 per square feet.

According to him, the Government Order for alienation of land was passed in a hurry, on February 8, when the Model Code of Conduct was looming in view of the Assembly elections. “There was no need for a government, which was in last few days in office, to issue an order to alienate prime property. The timing of the order was that the beneficiaries could get the land before a new government assumed office,” he alleged.

Mr Bharathi said that the order for allowing Bashyam Constructions to get CMDA approval and planning permission was a gross violation of RSO 24, which contemplates alienation of government property for public purposes.

“The legal opinion obtained clearing the alienation prima facie is untenable and appears to be obtained under pressure,” he alleged.

Mr Bharathi described as “spurious” the claim of the Government Order that the company could bring in an investment to the tune of ₹1,575 crore and generate 7,500 jobs since it had advertised to construct residential complexes.

Alleging that the Chief Minister, Deputy Chief Minister and Revenue Minister had entered into a criminal conspiracy with the Baashyam Constructions to grab government land for private gains, Mr Bharathi requested the Governor to register a complaint against them.