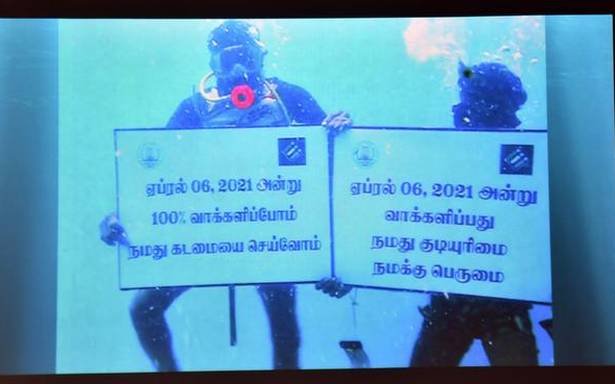 The district administration has roped in divers to create awareness among voters in a bid to ensure cent per cent polling on April 6 .

Ancient Thoothkudi is known for pearl fishery with divers diving deep into the sea without any life-saving gadgets to collect pearl oysters. Hence, Collector K. Senthil Raj, who has prepared two documentaries for cent per cent voting by senior citizens and the physically challenged, has decided to rope in the divers also in this series.

“This is the first of its kind attempt in the entire State… Besides creating awareness among the voters for ensuring cent per cent polling on April 6, the documentary by the divers also revives the glory of Thoothukudi known as ‘Pearl City’ as this is the pearl fishery coast of ancient Tamil Nadu. We have planned to share this documentary through social media and other formats,” Dr. Senthil Raj said, releasing the divers’ initiative on Thursday.

After encouraging students of various schools in the town to send 1 lakh postcards to their parents, grandparents and relatives, appealing to them to cast their votes without fail on April 6, the district administration involved self-help group members to draw colourful rangolis as part of the drive.

Garbage collection vehicles, while collecting degradable and non-degradable refuse from residents at their doorstep as part of the Corporation’s solid waste management programme, distributed awareness pamphlets appealing to voters to exercise their franchise without fail.

Transgenders, college students and the public were also involved in the exercise.

“However, this latest awareness event —divers’ initiative — is a unique venture that will have a lasting impact on voters and encourage them to go the polling station on April 6,” Dr. Senthil Raj noted while releasing the documentary.

Since pearl fishery was not in vogue anymore, conch divers were deployed for the awareness programme. After venturing into the sea in a mechanised boat, the divers dive deep into the sea with voter awareness placards that appealed to voters to exercise their franchise.

The Collector also honoured the divers and event organisers on the occasion.