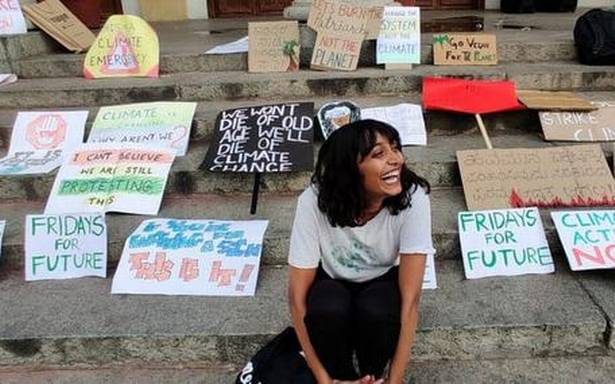 Disha A. Ravi, 22, who was arrested by the Delhi police in connection with the Greta Thunberg ‘toolkit’ case on Saturday, has been a prominent young voice on environmental issues in the city for nearly three years.

In 2019, Ms. Disha, then a student of Mount Carmel College, was one of the co-founders of Fridays For Future (FFF), India, an initiative led by Ms. Thunberg. One of her friends, who did not wish to be named, said that as she hailed from an agricultural family, concern for the environment and climate change came naturally to her. Ms. Disha also saw the ongoing farmers’ protests as part of the climate change crisis, sources said.

As part of the FFF, she was also active in creating awareness on the new draft of Environment Impact Assessment Notification-2020. Incidentally, the campaign ran into trouble with the Delhi police last year, who issued notices to the FFF under the Unlawful Activities (Prevention) Act and later the Information Technology Act, before withdrawing both later.

Disha’s work for FFF saw her profiled by international publications such as The Guardian and British Vogue. “It is not a matter of just fighting for our future; it’s also about fighting for our present. We are experiencing the climate crisis every day,” she had told Vogue in September 2020. She turned vegan a year ago, as a stand against cruelty to animals, and works at a vegan milk startup in the city.

Her arrest in connection with the ‘toolkit’ case, and the way she was picked up from her house in the city on Saturday, has drawn strong condemnation from the city’s civil society. Officials of the Delhi police came knocking on her house in Soladevanahalli, where she lived with her single mother, on Saturday noon. “They told the mother that they were taking her for questioning. But the next thing we knew, she was put on a plane and taken to Delhi, where she was reportedly arrested,” said a source who did not want to be named.

Multiple sources in the city police confirmed that the local police were not kept in the loop and did not know of the development until Ms. Disha was out of the city. The police refused to comment officially on the issue.

“The Delhi police have come and taken a brave daughter of the State without adhering to due process. The authorities, including the Home Minister and the Chief Minister, did nothing to stop it,” said Leo Saldanha, from the Environment Support Group.

Another activist, advocate Vinay Sreenivasa, said multiple High Court orders on the procedure to be followed while detaining a person in another State, including serving the accused a copy of the FIR in the regional language, were violated. “But the basic question remains — what is wrong with sharing a toolkit for a protest? How can it be a seditious act?” he asked.

Ms. Disha’s mother and her counsel declined to speak to the media.

02/15/2021 India Comments Off on Disha Ravi arrest: ‘Delhi police did not follow due process’
TV & Movies