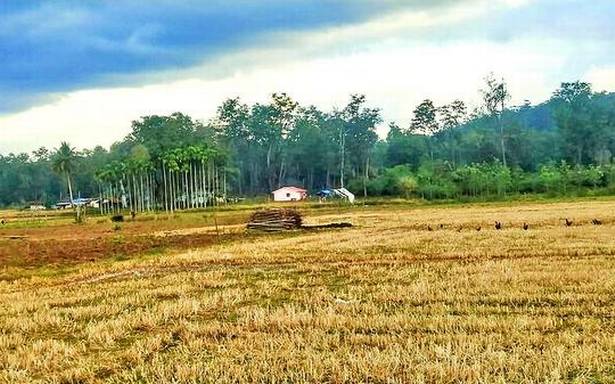 Discontent is brewing among settler farmers of Kumizhy hamlet inside the Wayanad Wildlife Sanctuary (WSS) over the alleged negligence of the government in providing them a voluntary relocation project.

The Kerala Forest Research Institute, Peechi, had done a survey nearly 12 years ago on the relocation of settlers under the voluntary resettlement project. It found that as many as 10,604 people from 2,613 families in 110 settlements needed to be relocated.

The survey had identified 1,388 people from 880 families in 14 settlements for relocation in the first phase at a cost of ₹88 crore.

The government could relocate nearly 600 families so far, including tribal families, in 12 settlements in the WSS under the Integrated Development of Wildlife Habitat Scheme (IDWHS) of the Ministry of Environment and Forests,

A few more families in two hamlets, including Chettyalathur and Kurichyad hamlets, have to be relocated, and the project is moving at a snail’s pace owing to technical reasons and alleged negligence of Revenue Department officials.

However, the Kumizhy hamlet is included as the first hamlet in the second phase of the project and as many as 120 families, including tribal families, have been awaiting for the execution of the project.

“As the hamlet is surrounded by the sanctuary on two sides and Mudumalai and Bandipur tiger reserves on the other sides, man-animal conflict is common in the hamlet, especially during summer when animals start their annual migration to the sanctuary from neighbouring tiger reserves,” said Vijayan, a tribal chieftain of the hamlet.

Infrastructure facilities such as educational institutions or healthcare facilities are still a distant dream to the inhabitants.

Many of the farmers in the hamlet had left for their relatives’ homes in neighbouring villages owing to the increasing incidents of wildlife attack, he said.

The remaining members of the hamlets convened a meeting on Thursday and decided to submit their grievances to the Forest Minister and senior officials of the Forest Department.

Their demands include expediting steps to execute the relocation project on a war footing and increasing the compensation from ₹10 lakh for a family to ₹30 lakh a family as the current compensation was fixed nearly 16 years ago.