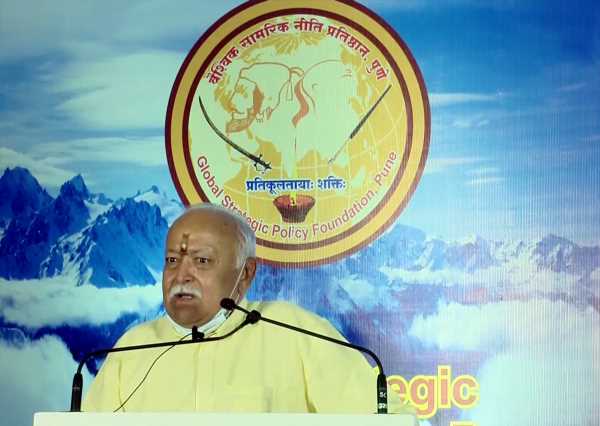 70-plus years after Independence, ‘Hindu India, metamorphosised as ‘Hindutva India’, is proving the British right — and for all the wrong reasons.
Mohan Bhagwat should have answers for the why of it, says N Sathiya Moorthy.

Mohan Bhagwat, the RSS big boss, has said — and rightly so — that British colonial rulers sowed the seeds of mistrust between Hindus and Muslims.

As he explained, Muslims stood to lose out on political leadership as Hindus would win the electoral sweepstakes by their sheer numbers. In context, the term ‘Hindu’ was used and mischievously so, to mean the Indian National Congress.

But that is what electoral democracy was, is and will be. As champions of the Magna Carta, the British knew it better than any other. Now, 70-plus years after Independence, ‘Hindu India, metamorphosised as ‘Hindutva India’, is proving them right — and for all the wrong reasons. Bhagwat should have answers for the why of it.

Gandhiji’s pronounced soft corner for Muslims in the country owed to this realisation that the British would try to divide the Indian community. Already, fellow-Gujarati Muhammad Ali Jinnah had an eye for the top slot. As a practical politician, who began at the grass-roots as advised by Gopal Krishna Gokhale, Gandhiji knew that for a united India, post-British, the majority had to ‘accommodate’ the minorities.

It is this tenet of Gandhiji that the Congress government since Jawaharlal Nehru too believed in, hence practised, post-Independence. The analogy of an orphaned nephew of the family would be apt.

At Independence, tinged in Partition violence, it became the moral, and physical, duty of the Union of India to especially make Muslims who had stayed back despite the enticement of Pakistan, feel less out-of-place and more wanted and comfortable.

The founding fathers enshrined only this Hindu value for protecting those that seek protection (abhayam, as often happens in the Ramayan) in Constitutional provisions for the protection of minority institutions.

This did not extend to the political sphere in the form of electoral reservations or the social sphere, as free and subsidised housing, or bank and government loans.

Instead, those tools of socio-economic empowerment were reserved only for the Dalits from within the majority Hindu community. It remains so despite the much-maligned Sachar Committee Report on Muslim backwardness and solutions.

The only time Muslims, and also Christians (read: Anglo-Indians) had any job and education quotas in the country was under the Justice Party scheme (Communal GO-II, 1924) in then then Madras Presidency, which was centred on present-day Tamil Nadu but with areas from the other three linguistic regions in South India.The Justice Party scheme was improvised and implemented by the successor government (1927-1930) of Congress Swarajist chief minister P Subbarayan. It provided for what translated as 16.6 per cent each for the Presidency’s Muslims, Anglo-Indians/Christians — and Brahmins.

It remained in place until after Independence when the Supreme Court stuck down all reservations other than those Constitutionally-mandated for the nation’s Dalits, given the legal identity of SC-STs (Champakam Dorairajan vs State of Madras, AIR 1951 SC 226).

While Dravidian parties, namely the non-electoral Dravida Kazhagam and the fledgling, breakaway Dravida Munnetra Kazhagam, protested to restore some form of quota for non-Brahmin Hindus and the Nehru government at the Centre yielded through the First Amendment to the Constitution, no such concession or entitlement was restored in the case of Muslims, Christians — and Brahmins. leaders too did not rise their voice.

It is against this background that Mohan Bhagwat’s pronouncement needs to be fast-forwarded to the present, when his RSS and its political acolyte the Bharatiya Janata Party have created the impression that the post-Independence Congress rulers were out to appease the ‘minorities’ and only as vote-banks.

If the Muslims and Christians of the time voted for the Congress, it was the only party worth the name anywhere in the country. The alternative in central India especially was the Hindu Mahasabha and its variants. That speaks for itself.

The Muslim honeymoon with the Congress, if any, ended with the Emergency. Sanjay Gandhi’s nasbandi (compulsory family planning) and Delhi’s Turkman Gate demolitions did it. The cat was out of the bag when years later the Atal Bihari Vajpayee government at the Centre appointed Jagmohan, the ‘villain of Turkman Gate’, first an MP and minister, then the governor of communally sensitive Jammu and Kashmir as it existed prior to the more recent abrogation of Article 370.

Whatever residual Muslim support the Congress still retained, all of it evaporated with Rajiv Gandhi’s confusing seesaw policy on issues impacting on the community. He swung in favour of traditional Muslim practices after the Supreme Court verdict in the Shah Bano case (1985). Only months later, his government allowed the reopening of the Ayodhya complex after decades of dispute and lockdown.

Post-Emergency, post-Indira Gandhi, Muslims across the country actually moved away from the Congress and even hated the party. They found electoral refuge in what later became regional parties like the Samajwadi Party in Uttar Pradesh and the Rashtriya Janata Dal in neighbouring Bihar.

In West Bengal, where again there are Muslim pockets, they first went with the anti-Congress Communists and now Trinamool Congress.

In the South, they have had the Indian Union Muslim League in Kerala, which for a long time alternated between the Congress and the CPI-M. In pre-split Andhra Pradesh they had the Owaisis’s All India Majlis e Ittehadul Muslimeen, though mainly in the Muslim concentration areas of Hyderabad-Secunderabad.

In Dravidian Tamil Nadu, local Muslims had moved away from the Congress to the rival DMK camp as far back as the historic 1967 elections that the latter swept — and has shared with its breakaway AIADMK rival.

It is only in Karnataka, the minorities vote(d) for the Congress, after successive regional experiments with the late S Bangarappa and others failed to make the grade.

Against this background, Mohan Bhagwat’s dated reference to communal mistrust in the country and attributing it near exclusively to the forgotten British colonial masters require serious re-reading and revision. His recent remarks, not always liked by many others in the RSS-led Sangh Parivar, even if a political statement and also excessively politicised, is still timely.

Before evoking the British, Bhagwat got caught in a controversy within the larger Parivar when he declared that those that resorted to lynching (of Muslims, which he did not have to add) were against ‘Hindutva’.

Bhagwat is not new to controversies of the time, but then a sinking feeling is emerging that he keeps throwing up such ideas only to soothe hurt feelings even among moderate sympathisers of the cause from among Hindus inside the country and friends of Modi’s India, outside.

Whatever the reality, especially over the past years of Prime Minister Narendra Modi’s single-handed emergence on the national scene and his ability to keep it better than any of his other Hindutva predecessors over the past decades, there is a strong belief that the RSS controls the BJP and not the other way round.

From the days of the Vajpayee government at the Centre, there is a definite belief — though without evidence — that whenever the BJP is in power, Nagpur and not Delhi is the real capital of India.

Bhagwat’s frequent iterations of the kind have only underscored this sentiment that he is giving expression to the RSS view where it does not approve of the Centre’s behaviour, and/or inability/unwillingness to control crude actions like ‘lynching’.

But there is a problem. Whether or not his so-called intended audience hear him, leave alone listen to him, or debate it until the cows come home and leave it at that, his moderate Hindu audience may be getting tired of it all, sooner than later. They too may begin seeing a pattern — and cynically begin expecting them at periodic intervals.

That certainly is not good for the BJP ruling the Centre and in many states across the nation, hoping to repeat their past feat in the future, immediate and otherwise.

By extension, it is not good for the RSS either. More so, in a given situation where the BJP and Modi leadership have no visible challenge, either from within or outside the party

After all, middle class disenchantment has marred electoral victories of hopefuls in the past. It created a vacuum, instead, with the full knowledge that it better be filled by a faceless leadership than continuing with the status quo.

09/13/2021 India Comments Off on Did British sow Hindu-Muslim mistrust, as Bhagwat says?
India