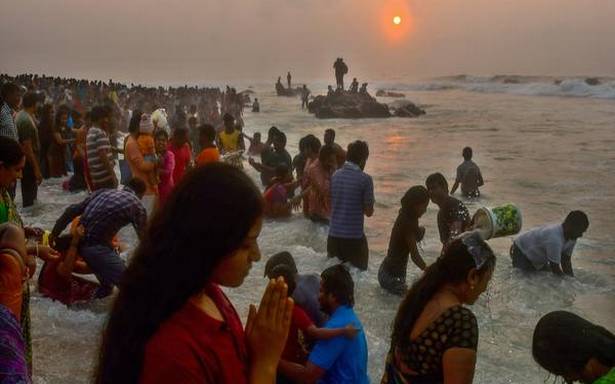 A large number of devotees took holy dip at various beaches in the district after offering prayers on Maha Sivaratri, on Friday.

Rama Krishna Beach, Rushikonda, Jodugulapalem, Yarada, Appikonda and many other beaches were thronged by people of all ages. COVID-19 safety norms were totally ignored.

After observing a fast on the occasion of Maha Sivaratri, the devotees took a holy dip and offered prayers in the nearest temples.

The R.K Beach stretch was packed with devotees since early morning. A number of people even from areas such as Madhurawada, Simhachalam, Kancharapalem and Akkayyapalem thronged the beach. While the youth took selfies after taking the ritual bath, elderly persons were seen offering flowers and performing prayers. Parents were seen giving a bath to their little ones at the sea. A number of NGOs and a few companies had set up stalls and offered water and buttermilk sachets to the devotees. Police as well as community guards had a very tough time in controlling people and ensuring free flow of traffic. A number of fishermen were stood as lifeguards to ensure that there were no drowning deaths.

Earlier, Maha Sivaratri was celebrated with religious fervour. Several events were organised as part of the festival at R.K. Beach. A large number of devotees had started to throng Beach Road after 10 p.m. on Thursday. The police had allowed entry of vehicles into Beach Road up to 8 p.m. Due to heavy crowd, the vehicles were diverted. Vehicle entry was completely restricted from Park Hotel Junction.

Additional Deputy Commissioner of Police (Traffic) Ch Adinarayana said that over 500 police personnel were deployed at R.K Beach, Rushikonda, Jodugullapalem and Appikonda. Apart from them, about 150 additional AR personnel were also deputed. “We had used public address system to control crowd at Beach Road. At a few areas, we had to divert the traffic to ensure that there were no congestions,” he said.