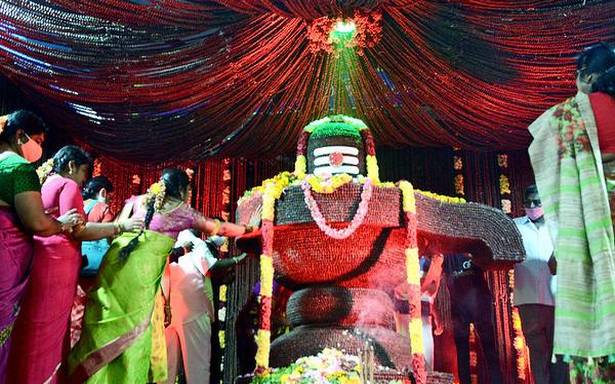 Many stay awake throughout the night for the ‘Lingothbhav’ darshan

The Maha Sivaratri was celebrated with religious fervour in Ongole on Thursday.

Shedding fears of coronavirus, devotees made a beeline for the Siva temples on the auspicious occasion.

A huge ‘Sivalinga’ was installed by arranging lakhs of rudraksha beads at the Santhapeta Sai Baba temple was the cynosure of all eyes. It was tastefully decorated with rudraksha garlands.

Energy Minister Balineni Srinivasa Reddy and his wife Sachi Devi, along with a large number of devotees, took part in the ‘Mahadhanvantri’, ‘Maha Mrutyunjaya’ and ‘Mahachandi Yagam’ performed by a group of Vedic priests led by Mathampalli Dakshinamurthy. The rituals were performed seeking the blessings of the Lord to tide over the coronavirus pandemic.

The rudraksha beads ranging from two to 14 faces were specially procured from Nepal for the worship, said the head priest said before performing the ‘Purnahuti’.

Devotees started arriving at Siva temple since the early morning hours and performed ‘abhishekam’ to the Lord.

Many devotees stayed awake through out the night for the ‘Lingothbhav’ darshan at many temples including the one at Jambulapalem which has 1,116 Sivalingas.

Many ventured into the Nallamala forest guided by Chenchu tribals to visit the Gundla Brahmeswaram temple. Bhairavakona temple in the Nallamalla forests also witnessed a huge rush of devotees.

A bull race was organised as part of the celebrations at Chinna Cumbum.

The organisers said that the competition was aimed at kindling interest among farmers to protect the endangered Ongole bull, which is considered the vehicle of Lord Siva.

After the competition, the bull trainers were presented with Sivaratri gifts including cash awards and new clothes.