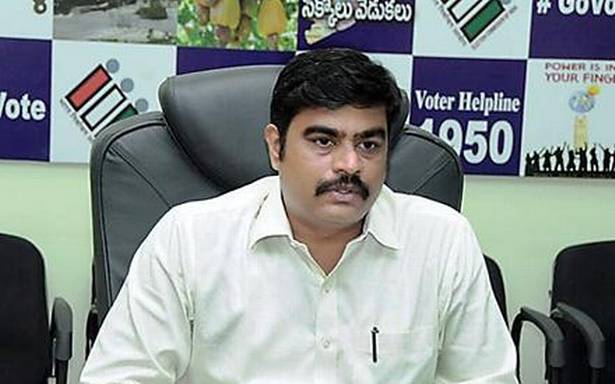 Krishna district Collector J. Nivas asked the public not to stay in dilapidated buildings and the villagers staying in low-lying areas, to shift to safe places.

Heavy to moderate rains have lashed many parts of Krishna district since last night and the officials sounded an alert over a further heavy rainfall forecast.

Collector J. Nivas asked the public not to stay in dilapidated buildings and the villagers staying in low-lying areas, to shift to safe places.

In a video-conference held on Friday, Mr. Nivas directed the officials of Revenue, Medical and Health, Irrigation, Fire, Police and Fisheries Departments to be on alert in the villages.

Superintendent of Police (SP) Siddharth Kaushal has said that there was no entry for the devotees into Manginapudi, Hamsaladevi, Koduru and other beaches. Devotees are requested not to go into the Krishna river and canals for taking holy dip in villages during the Kartika Pournami.

“Police pickets have been arranged at Manginapudi, Peddapatnam and other beaches as the sea is rough. Devotees are requested to cooperate with the police,” said Machilipatnam Deputy Superintendent of Police (DSP) Sk. Masum Basha.

National Disaster Response Force (NDRF) 10th battalion commander Zahid Khan said that the force has so far rescued about 80 people from various places in Rayalaseema region and shifted them to safer places.

“Two teams each of NDRF were deployed in Tirupati and Nellore and one in Kadapa,” Mr. Khan told The Hindu on Friday.

Avanigadda DSP Md. Mahaboob Basha said that all beaches and the pushkar ghats along Krishna River were closed and patrolling has been intensified along the bunds.

11/19/2021 India Comments Off on Devotees cautioned against taking holy bath in the rough sea, Krishna river and canals
India