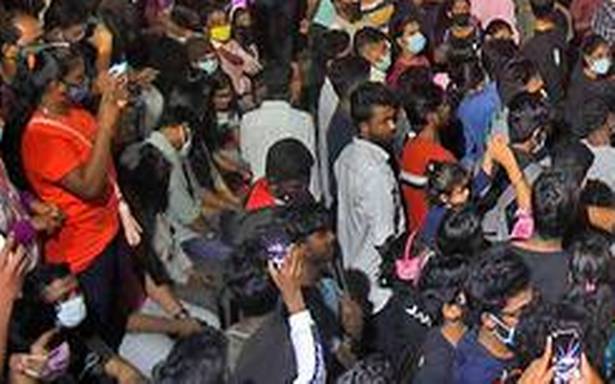 Despite curbs imposed by the district administration due to the threat posed by the Omicron variant of the novel coronavirus, a large number of people gathered on the Beach Road to celebrate New Year.

In fact, by 11 p.m., the entire Beach Road was so crowded that police were compelled to close the entry points, particularly near the Gandhi Statue, to manage the crowd. Mild force was used to disperse the crowd, which became restless after being denied entry to the Beach Road.

Senior Superintendent of Police, Law and Order, R. Lokeshwaran told The Hindu that celebrations went on peacefully in Puducherry. The police issued 1,323 challans to people for violating COVID-19 protocol.

Ahead of the celebrations, Home Minister A. Namassivayam visited the Beach Road to review the preparations.

Blocking the entry of vehicles to the White Town area for managing traffic also yielded good results as there were not many traffic jams, unlike the previous years, in the town. Four-wheelers were parked in Old Port complex, Petit Seminaire in Uppalam and Bharthidasan Government College for Women.

The police operated buses, provided by the Tourism Department, to take people from the three parking lots to the Beach Road.

Musical night organised by Puducherry Tourism Development Corporation on the Old Port area saw a reasonably good attendance. “We were worried about the attendance due to COVID-19 regulations and directions of the Madras High Court restricting the sale of alcohol after 10 p.m. But we received a good number of people,” an official said.

Treasurer of Hotels Association of Pondicherry G. Antony Prosper Anandraj said most of the hotels were fully occupied. “It was good for the hospitality industry overall. There was a good response from the tourists,” he said.