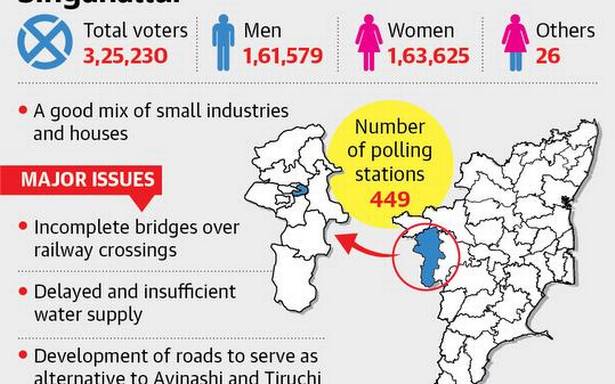 A completely urban Assembly constituency without the civic amenities that is expected of such an area is perhaps the description that best fits Singanallur. Spread over 19 wards of the Coimbatore Municipal Corporation, the constituency covers the central eastern parts of the city and includes airport, a number of education institutions, hospitals and industrial units.

Demographically the constituency has mostly middle and lower income group people and a sizeable chunk of Telugu-speaking Naidu voters. Members of the Kongu Vellalars, Kurumba Gowder and Kongu Chettiars make up for the rest.

Incumbent N. Karthik of the Dravida Munnetra Kazhagam is in a triangular contest this time, as he is pitted against K.R. Jayaram of the All India Anna Dravida Munnetra Kazhagam and R. Mahendran of the Makkal Needhi Maiam. The three, along with independents, are contesting the constituency, where voters in the last six elections had thrice voted the AIADMK (1991, 2006 and 2011), twice voted the DMK (1996 and 2016) and the CPI(M) once in 2001.

In this election, the demand for civic amenities on a par with the well-developed parts of the city tops the voters’ wish list. Civic activist and Residents Awareness Association of Coimbatore Honorary Secretary R. Raveendran said the voters wanted the next MLA to solve the imbroglio in the completion of the bridge over railway crossings in Neelikonampalayam, SIHS Colony and Thanneerpandal. That the projects were not completed in the last 10 years and the residents north and south of the railway line were forced into hardships put the demand on top of the wish list, he added.

Continuing on the demand for infrastructure front, the voters wanted the next government to develop two scheme roads, as an alternative to the arterial Avinashi Road and Trichy Road and widen the Sowripalayam Road, perhaps one of the narrowest bus routes in the city.

Mr. Raveendran said the voters also expected the development of the scheme road west of the Coimbatore airport to serve as an alternative to the Kamarajar Road that connected Avinashi Road with Trichy Road.

In the Singanallur Housing Unit, the residents want new houses as theirs were dilapidated and declared unsafe for habitation. That the government made all the right noises but did very little even after Deputy Chief Minister O. Panneerselvam visited the place over a year ago had left them helpless, the residents added.