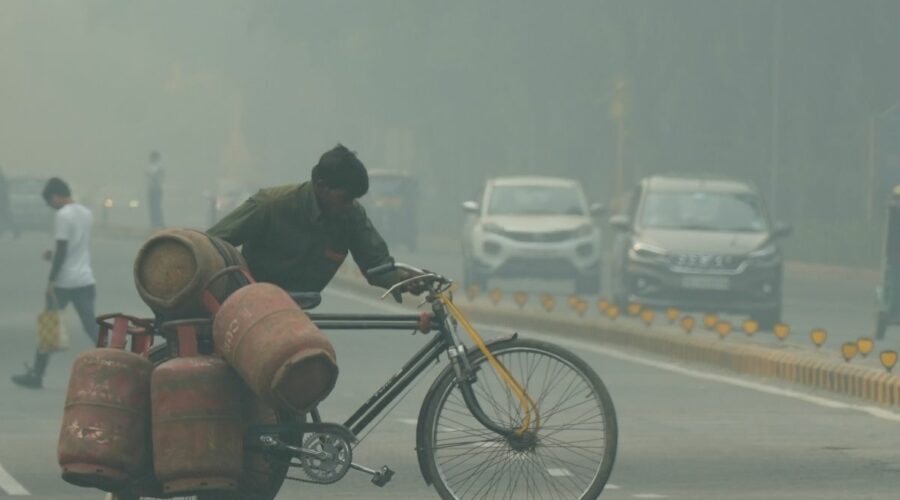 Environmentalists called measures under Stage IV of the Graded Response Action Plan “ineffective” and said it was a “little too late” to ban diesel light motor vehicles in Delhi-NCR as the final stage of a central panel’s anti-pollution action came into effect.

The Commission for Air Quality Management (CAQM) on Thursday decided to implement measures under Stage IV of the Graded Response Action Plan (GRAP) — a set of anti-pollution measures followed in the national capital and its vicinity, according to the severity of the situation — in view of the worsening air quality in Delhi-NCR.

The CAQM banned the plying of four-wheeled diesel light motor vehicles in Delhi and adjoining NCR districts and the entry of trucks into the national capital as part of the final stage of GRAP. However, BS-VI vehicles and those used for essential and emergency services are exempted.

Delhi’s overall air quality index (AQI) at 445 at 3 pm. Almost all air quality monitoring stations reported a ‘severe’ reading while 16 logged an AQI of more than 450. An AQI of above 400 is considered ‘severe’, which can affect healthy people and seriously impact those with existing illnesses.

Bharati Chaturvedi, founder and director of Chintan Environmental Research and Action Group, claimed the entire GRAP initiative was problematic and that the measures should have been in place throughout the year.

“The action plan is problematic. It worked well as a concept when we had no access to data. But these measures should be in place throughout the year in order to bring down AQI levels to 100 or below,” Chaturvedi told PTI.

She further said construction workers were not being compensated enough and schools’ vacation schedules should have been reworked earlier.

“Construction workers in Delhi are not getting enough compensation. Most of them earn Rs 18,000 a month whereas the Delhi government is offering only Rs 5,000 a month.

The CAQM had on Saturday directed authorities to impose a ban on construction and demolition activities in Delhi-NCR, barring essential projects, under the third stage of GRAP.

Chaturvedi further said, “GRAP was implemented earlier too and shutting down schools under the action plan is nothing new. This happens every year, so why didn’t the Kejriwal government re-work their vacation schedules?”

Chief Minister Arvind Kejriwal on Friday said primary schools would be closed from Saturday in a bid to protect children from the effects of the deteriorating air quality.

Environment Minister Gopal Rai ordered 50 per cent staff of Delhi government to work from home and said an advisory would be issued to private offices to follow suit.

Speaking about implementation of the final stage of GRAP, environmentalist Bhavreen Kandhari said it was a little too late to implement such measures.

“Good to know that diesel vehicles have been put under restrictions but isn’t it a little too late? There are around 19 lakh vehicles in the national capital that do not have a valid PUCC (Pollution Under Control Certificates) but there is no technology to know whether such vehicles are plying on the roads or a system to impound them,” Kandhari told PTI.

She alleged that the measures announced were ineffective as there were not enough boots on the ground.

“Do we have enough force/personnel to implement these measures? For the existing ones, do they have the equipment and a strategy to impound these vehicles? Has the commission considered taking up additional companies of CAPF (Central Armed Police Forces) on all border checkpoints to assist the Transport department to stop polluting vehicles from entering?

“GRAP can go from 1 to a million stage but has no meaning if the laws aren’t enforced,” she said.

Centre for Research on Energy and Clean Air analyst Sunil Dahiya said the CAQM should also pull up inefficient administrations through penal actions if they failed to control pollution from sources within their areas of control.

“It is time the CAQM starts using its powers to shut down polluting industries and activities. The commission should also pull up the inefficient administration through penal actions if they fail to control pollution.

“We have enough resources and systems in place to identify polluters and those should be used for strict governance,” Dahiya said.