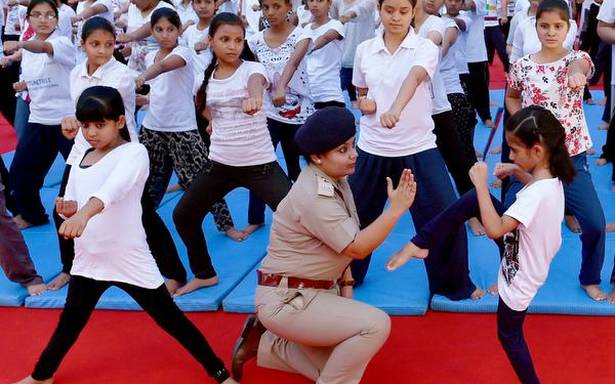 The classes, which were briefly discontinued in 2020 due to the pandemic, were held online prior to this.

Amid a decline in COVID-19 cases in the national capital, the Delhi Police’s Special Police Unit for Women and Children (SPUWAC) has written to RWAs, NGOs, educational institutions and hospitals across the city for conducting self-defence training programmes for women and girls, officials said on Sunday.

The self-defence training programmes, which are conducted free of cost by SPUWAC, were briefly discontinued last year due to the pandemic. Later, they were conducted online.

With schools in the national capital reopening and more people stepping out of their homes, Assistant Commissioner of Police (Self-defence, SPUWAC) Sunita Sharma has written to various NGOs, RWAs, educational institutions, BPOs and hospitals, inviting them to host the Delhi Police’s self-defence training programmes for their women staff and girl students.

For this, more than 45 staff members from Ms. Sharma’s unit are working in coordination with district officers to collect data of NGOs, schools, RWAs, BPOs and hospitals spread across the 15 police districts, a senior police officer said.

“After collecting the required data, each of our staff members will verify those details and approach at least 15 such organisations every day to persuade them to conduct the self-defence training programme,” the officer said.

Self-defence training boosts the confidence of women and children and prepares them to protect themselves in case they do not receive immediate help when they need it, the officer added.

Officials said the idea behind the initiative is to impart self-defence training to as many women and children in the city as possible.

Recently, SPUWAC organised a 15-day training programme for the National Association for Blind at Hauz Khas.

A total of 30 visually challenged women and girls were imparted self-defence training and were taught to deal with antisocial elements and how to prevent stalking and assault, Additional Commissioner of Police (SPUWAC) A.V. Deshpande said.

SPUWAC conducts 10-day self-defence training programmes and one-day workshops both in-person and online. These programmes and workshops are conducted by women inspectors of the unit trained in martial arts.