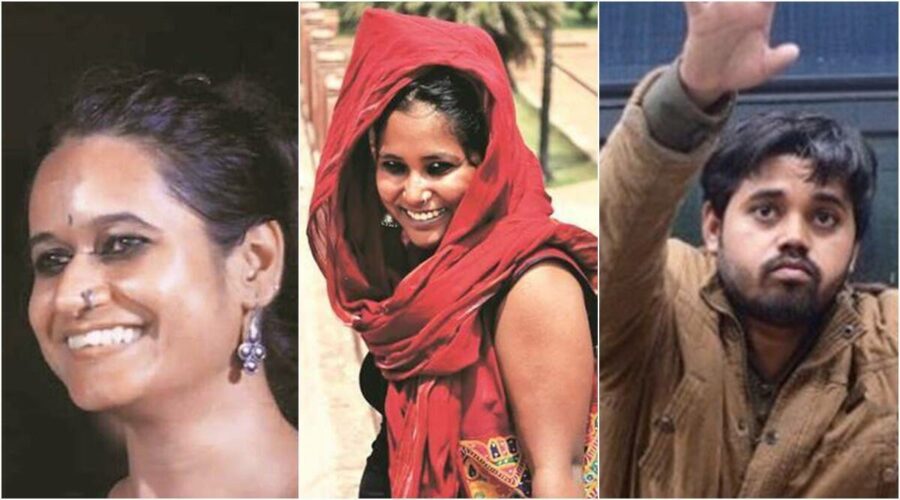 Pratiksha Baxi writes: India’s penal policy must change such that jail is an exception, rather than increasing mass incarceration of pre-trial prisoners.

On June 15, in its landmark orders, the Delhi High Court granted bail to student activists Asif Iqbal Tanha, Natasha Narwal and Devangana Kalita. Their courageous legal battle, fought from prison for over a year, has not only highlighted the repressive aspects of the penal policy of the state but also linked the question of mass incarceration of undertrials with the question of political citizenship.

In these orders, we find factual and constitutional answers. Simply put, the court found no specific or factual allegations against the student activists who participated in the anti-CAA protests and were charged under the draconian Unlawful Activities (Prevention) Act, 1967. Therefore, section 43D (5) of the UAPA, which denies bail, did not apply. In Asif Tanha, the court advocates care in deploying “definitional words and phrases” so as not to “trivialise the extremely heinous offence of ‘terrorist act’.”

In Asif Tanha, the court held that “the foundations of our nation stand on surer footing than to be likely to be shaken by a protest, however vicious, organised by a tribe of college students or other persons, operating as a coordination committee from the confines of a university situated in the heart of Delhi”.

In Natasha Narwal, the Delhi court has been “constrained to express, that it seems, that in its anxiety to suppress dissent, in the mind of the State, the line between the constitutionally guaranteed right to protest and terrorist activity seems to be getting somewhat blurred. If this mindset gains traction, it would be a sad day for democracy”.

Reiterating constitutional principles underlying the rights of pre-trial prisoners, the court observed that “apart from being prima facie satisfied as regards the charges levelled; the court must also reasonably assess the apprehension of flight risk, evidence tampering and witness intimidation; with careful regard to the genuineness of the prosecution” (Natasha Narwal, para 30). It might be noted that these student activists have got bail in the multiple criminal cases that have been lodged against them. In these cases, the witnesses were either police officials or protected witnesses. The students naturally do not have the power to tamper with such evidence or such witnesses. Nor are they flight risks.

In Natasha Narwal, the Delhi High Court reminds us “that the object of bail is neither punitive nor preventative but is principally to secure the presence of the accused at the trial; and that punishment begins only after conviction and that everyone is deemed to be innocent until duly tried and found guilty”. Yet many activists, academics and students continue to be imprisoned under the draconian exceptional laws in Covid-infested prisons. And the imprisonment of pre-trial prisoners is at the heart of the penal policy of the state.

Pre-trial prisoners (or undertrials) in India constitute most of the prison population in India. The “undertrial” is literally buried under the weight of the trial before it starts and it is common knowledge that undertrials suffer unusual forms of punishment before the trial starts. Burying a colonial subject under the trial was an unusual form of punishment in colonial law. Congestion of prisons by mass incarceration of undertrials was tied to the project of despotic rule.

In the state’s penal policy, the imprisoning of undertrials is not seen as an unusually cruel punishment in the inhuman conditions of prisons. The maxim that jail is the exception is not the state’s policy. The constitutional culture that values the presumption of innocence is not allowed to flourish except in charismatic judgments and reform measures initiated by individual judges. Historically speaking, dominant social, economic, and political interests have been served by keeping undertrials incarcerated for decades.

It has been in the interest of the political class to say that the law must take its “due course”. But when the law takes its due course, the right to a speedy trial is vitiated. In Union of India v. K A Najeeb (2021) the Supreme Court examined Section 43D (5) of UAPA to hold that constitutional courts can grant bail to terror suspects, when their right to a speedy trial is violated. The court observed that the rigours of the said provision will “melt down” where there is no likelihood of the trial being completed within a reasonable time.

Inhuman punishment extended over long periods of incarceration might melt down the provision. The law is fleshy, and it takes its time to make undertrial bones rot, and for black fungus to rob their vision. This is what is meant by law taking its due course, from the point of view of the incarcerated.

Prison reform in an everyday sense then becomes urgent to counteract the calculated ways in which the socially reviled and politically outcast body is made to rot in the lockdown prison. And, therefore, most prison reform petitions by the incarcerated are about the everyday — water, food, diet, medical treatment, medicines, books, exercise, phone calls, ventilation, visits, letters, newspapers, work, wages, and simply, the daily rationing of the chance to see the sky. Natasha Narwal and Devagana Kalita through their writings, drawings and prison reform petitions during incarceration have made powerful links between questions of civil liberties, political participation and the patriarchal inhumanity of prisons.

The exploding bail dockets tell us that the state’s penal policy is to expand the mass incarceration of undertrials, and mass arrests of marginalised people and political dissenters. The now routine criminalisation of dissent and free speech, the phenomenal increase in imprisonment, custodial deaths and torture of Muslims, Dalits, Adivasis, women and human rights dissenters has re-defined citizenship. Today, bail petitions are as much pleas for claiming political citizenship as they are about individual liberty.

Surely, the state’s penal policy must change such that jail is an exception, rather than increasing mass incarceration of pre-trial prisoners.

This article first appeared in the print edition on June 16, 2021 under the title ‘When jail is the rule’. The writer is a sociologist and author of Public Secrets of Law: Rape Trials in India (OUP, Delhi, 2014)