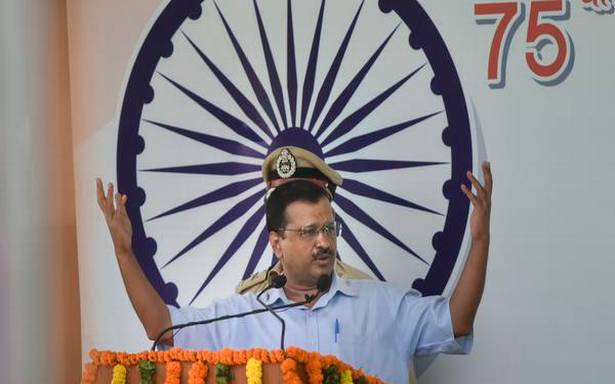 Delhi has emerged as a model of governance, Chief Minister Arvind Kejriwal said on August 15, announcing the launch of ‘Deshbhakti’ curriculum in government schools from September 27 and yoga classes in residential areas from October 2.

In his Independence Day address at the Delhi Secretariat, Mr. Kejriwal paid homage to freedom fighters as well as to doctors, nurses and paramedics who lost their lives while serving people during the coronavirus pandemic.

The Delhi government schools will start teaching ‘Deshbhakti’ curriculum from September 27 as a tribute to freedom fighter Bhagat Singh, he said.

"This will be an activity-based course in which the school children will be taught how to contribute to the development of the country and discharge their ‘surya’ and be ready to sacrifice even their lives for the nation," Mr. Kejriwal said.

"We were teaching subjects to students but they were never taught Deshbhakti. Now they will learn the essence of patriotism. I urge parents to talk to their children after they return to their homes to talk about Deshbhakti," he added.

Listing various initiatives and programmes of the government, he said, "Delhi has emerged as a laborartory of governance and its initiatives are being discussed and adopted not only in India but the world over." Mr. Kejriwal saluted the frontline workers who gave their lives during the pandemic and said the government gave Rs 1 crore each to their families as a gesture of gratitude and honour them and tell them that they are not alone.

He said the government will start yoga classes in parks, community halls and other such places across the city from October 2.

If 40-50 people in any residential colony come forward, the Delhi government will provide them yoga instructors, he added.

The chief minister thanked Olympic medalists and said the country has to prepare to win 70 medals next time. He invited sportspersons to join the Delhi government’s Sports University.

Mr. Kejriwal said Delhi is also working on to host the Olympics in the city after 2047.

Citing his government’s vision of Delhi in 2047, Mr. Kejriwal said the city’s per capita income should be equal to Singapore and added that it could be achieved if both the government and people work together.

He also called the people to make the Delhi world’s best and most livable city and India a strong nation in the world by 2047.

While announcing that Delhi will have its own education board, he said children in government schools will have access to international level of education since the Delhi Board of School Education inked a pact with International Baccalaureate last week.

Delhi will have a Sainik School, something which it did not have earlier, and preparations are also being made for starting a Delhi Armed Forces Training Academy to prepare students for the armed forces, Mr. Kejriwal said.

08/15/2021 India Comments Off on Delhi has emerged as model of governance in country, says Kejriwal
India