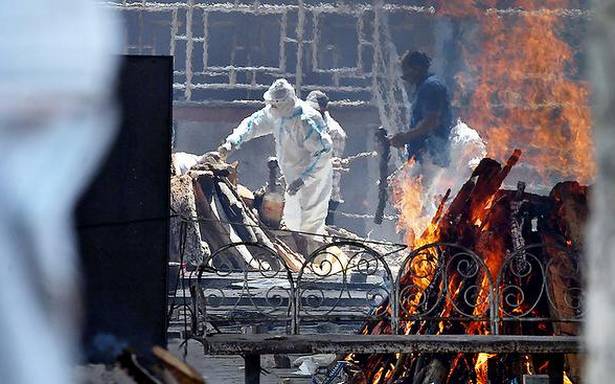 Mayors say they are increasing cremation, burial facilities in the Capital

North civic body Mayor Jai Prakash on Tuesday alleged that the Delhi government is not providing “correct figures” of COVID deaths in the Capital and and the bodies of such patients were being cremated almost around the clock at crematoria and burial grounds over the last week.

The city’s civic bodies compile records related to last rites till 6 pm on a daily basis but if this format was changed to include cremations and burials till midnight, he alleged, the daily figures would be “substantially higher.”

“The Delhi government never gives correct figures for reasons best known to them. The last rites of those losing their lives to COVID are happening almost around the clock at Nigambodh Ghat, which is one of the most utilised facilities under the North body — 260 funerals took place despite its capacity of 152 yesterday [Monday],” Mr. Prakash said. “We compile cremation figures for a particular day till 6 p.m. but bodies keep coming beyond that time as well and are added to the next day’s report. If we changed the format to include last rites till midnight, the daily figures would be substantially higher,” he added.

The Mayor, under whose jurisdiction 14 of the 29 funeral venues in the city lie, added that he had written to the Forest Department over the dwindling supply of wood for funeral pyres. He said he had requested the department to provide them with trees that can be used for this purpose before the current stock of wood gets exhausted.

According to the combined records of the three Municipal Corporations of Delhi, 4,125 cremations and burials were performed between April 19 and till 6 p.m. on April 26. The Delhi government, however, recorded 2,477 COVID deaths over the same period.

A Delhi government source said a significant reason for the mismatch of 1,345 bodies, in this case, was due to the deaths of COVID patients who either died on their way to the hospital or under circumstances where they could not secure admission on time.

The dedicated capacity for the last rites of COVID patients at 29 funeral venues spread across the 11 municipal zones in Delhi has been enhanced by almost 75% over the last week but is still proving less.

In fact, 20 funeral platforms recently created at two adjacent public parks in Sarai Kale Khan will, according to South civic body Mayor Anamika Mithilesh Singh, will be increased fivefold over the coming days.

“The lockdown is leading to labour issues but, over the coming days, we will increase the number of funeral platforms from 20, which were just created at two public parks to 100,” she said.

East body Mayor Nirmal Jain said funerals at the facilities under his jurisdiction began at 7 a.m. and went on till between 2 a.m. -3 a.m. on a daily basis.

“Temporary platforms have been created to augment capacity and we will increase it further as and when required over the coming days,” he said.

The capacity at crematoria and burial grounds on April 19 was 505; by April 26 this had been increased to 882 with the maximum increase in capacity, by 109 platforms, affected on Monday to bring it up from 773.

The Mayors of the three civic bodies said they have been hoping to ensure that “no one is forced to return home” without being able to perform the last rites of their kin — both for the sake of public health safety as well as on humanitarian grounds.