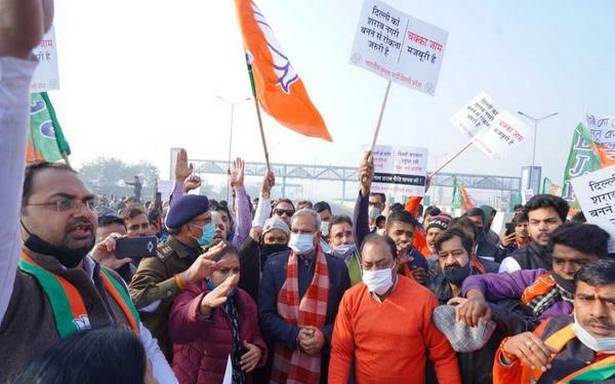 The protesters raised slogans against the city government and its new excise policy.

Delhi BJP workers staged a "chakka jam" protest against the city government’s new excise policy on Monday and blocked roads at different locations in the national capital, including near the Akshardham temple.

The protest near the Akshardham temple was led by Delhi BJP president Adesh Gupta.

"The Delhi government is opening liquor shops illegally across the city under its new excise policy. Shops are being opened near residential and religious places. Our protest will continue until the new liquor policy is rolled back," Mr. Gupta told reporters.

People had to face heavy traffic due to the protest near the Akshardham temple.

A commuter, who was stuck on National Highway 24, said, "There is a heavy traffic jam on NH-24. Most of the roads are blocked by the protesters and it is causing inconvenience to people like us who need to reach office on time."

Asked about the commuters facing trouble due to the protest, Mr. Gupta claimed that it is a public movement and that people are ready to bear with it in order to get rid of the new excise policy of the Aam Aadmi Party (AAP) government.

Other locations where the "chakka jam" protest is being conducted include the Car Bazar at Vikas Marg, Dayaram Chowk and Civil Lines.

The protesters raised slogans against the city government and its new excise policy.

They also made repeated announcements that all emergency vehicles should be given way and no harm should be caused to public property.