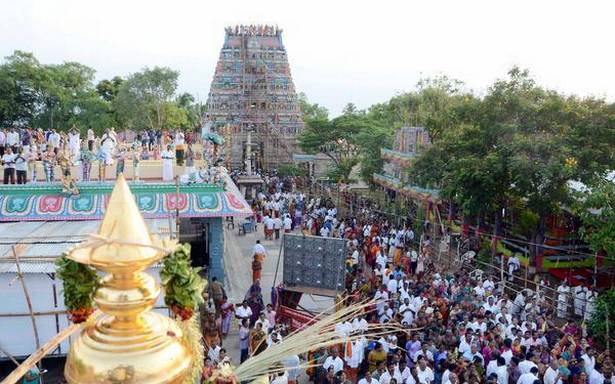 Officials of the Hindu Religious and Charitable Endowments (HR&CE) Department said that a decision on reopening the prasadam stall located inside the Bhavani Sangameswarar temple that was closed after the BJP members objected to the stall selling packets with ‘halal’ certification would be taken soon.

The stall, run by Vijayalakshmi of Bhavani, is located near the Adi Kesava Perumal shrine where sweet pongal, tamarind and curd rice, laddu and other prasadams, all prepared in the temple kitchen, were sold for the devotes. On January 1, ‘murukku’ packets with certification were kept for sale in the stall. Few members of the BJP and Hindu Makkal Katchi objected to it and raised slogans in front of the stall. They said that the packets were purchased from outside shops and kept for sale.

The HR&CE officials conducted an inquiry and ordered closure of the stall. All the packets purchased from outside the temple premises were removed and the stall was closed immediately. A notice was served on the stall licence holder seeking a written explanation. The stall continues to remain closed till now.

Sources said that the department had received a reply from the licence holder and a decision on reopening the stall would be taken soon. “It is the first time that the violations were found and an appropriate decision would be taken,” the source said.